Tasini – You have had an extensive and successful career in photography. What first inspired you to pursue it? Was it your early experience with Ansel Adams?

Folberg – My first encounter with photography was when my father gave me a camera and signed me up for a course at the People’s Art Center in St. Louis (no longer in existence). I was really drawn to landscape photography, especially after seeing Ansel Adams’s work at the George Eastman House. I actually looked up Ansel’s address and asked to apprentice with him. He was an excellent teacher and an amazing person. He was this warm, charismatic, and very funny person. I think his personality contributed to his great success as an artist. You couldn’t help but enjoy him, and he always welcomed people in.

Tasini – Israel is a recurring subject in your work, as you made aliyah there at age 26. What inspired you to move there from California?

Folberg – I was looking for change and something more energizing, as I was beginning to feel like California was too static. I wanted some place with deeper and more historic resonance. When we moved there we only planned to stay a year, but of course things don’t always go as planned.

Tasini – Your Celestial Nights photographs are absolutely beautiful and one of my personal favorite series. In your book, Celestial Nights: Visions of an Ancient Land, your inspiration for this series is poetically communicated, but what about your process? Could you explain how you executed such stunning photographs?

Folberg – Well, there was a real challenge in trying to achieve what I wanted, which was to replicate the human experience of looking up at the night sky and seeing the stars fixed in place. I wanted to capture that sense of wonder and inspiration that the stars have created for humans throughout all time. But the problem is that when you take a picture of the night sky using a long exposure, the stars appear streaked because they are changing position with the rotation of the Earth. So what I did to capture them at a standstill was use a camera rotating in the opposite direction of Earth’s rotation, to nullify the movement of the stars. To then capture the landscape in a readable manner, I had to take a separate picture, combine the two using two digital negatives, and then contact print the combination on silver gelatin paper.

Tasini – Another great series is Travels with the Impressionists. You explored France in an attempt to get in touch with its great artistic history, and created photographs which bridged this history with contemporary life. I feel that this is a very interesting and important artistic endeavor, to bridge past and present. Would you agree? Why or why not?

Folberg – For this project, I was asked to bring the vision of the Impressionists to life in the present time. To do this, I immersed myself in the lives and works of Pissarro, Cezanne, Monet, Manet, tried to adopt their visions and borrow their ideas, and then recreate them with my 21st century vision and 21st century tools. These pictures were created by Neil Folberg and Cezanne, and Neil Folberg and Monet. I was moving in and out of time, and it was a difficult intellectual exercise with a strong aesthetic underside. So, yes, I do agree that it is an important artistic endeavor.

Tasini – After getting a chance to explore both mediums, what do you feel is at the crux of the relationship between Impressionist painting and photography?

Folberg – Photography had actually already been invented at the time the Impressionists were painting – Degas used photography quite a bit for example. These artists appreciated photography because it had the promise of doing what they were attempting to do all along with their painting: to instantaneously capture fleeting modern moments. However, the technology was not advanced enough to do this as well as their painting did. So, there really is a significant relationship there.

Tasini – One of your latest photographs, History Lesson, is packed with different actions and characters – students, dancers, and soldiers – simultaneously presented in a single image. Could you explain your method in achieving this picture and give us the story behind it?

Folberg – This picture was the first of its kind in a series I’d like to do more of. It was not my first experiment with a staged set production, but it was certainly the largest and most complex. It involved set design, actors, and costumes. I chose a room with a lot of history for the picture’s setting. Today the room is the rehearsal studio for the Bat Sheva Dance Company, whose dancers actually appear in the photograph. In 1948, it was the headquarters of pre-state armies, represented by the soldiers, and in 1920 it was the first Hebrew language school in Tel-Aviv.

Thematically, I was blending three periods of time in one image. My work is often influenced by the Midrash, which holds that time and place are fluid and that all times and places can exist together. This is a key theme in my other series Celestial Nights and Serpent’s Chronicle. In History Lesson, I was considering the subjective state of the schoolgirls parallel to the unstable time in which they were living. They must have been fearful of inevitable conflict, which is reflected by the soldiers, but also hopeful for a country that might be their own, a hope that the dancers embody with their gracefulness and ease.

Tasini – You are not only an artist, but also a gallery owner. What is it like to balance the two?

Folberg – To tell the truth, the gallery was an accident. My father started a photography gallery in San Francisco after I began my career, and when he passed away I inherited it. I essentially had no choice in the matter, but ended up enjoying it despite its challenges. Sometimes I can’t do my own work and the gallery work at the same time, so I have to move in cycles. I’ll be wholly invested in my work for a year, and then during the next sixth months all my effort goes into the gallery.

Tasini – If you were neither the artist or gallery owner that you are, what would be your dream career?

Folberg – I might have liked to be a filmmaker, but I think I like the still image better.

Tasini – Do you have certain pictures that you’d call your favorites, or ones that are very meaningful to you?

Folberg – If I had to choose one body of work, I would say Celestial Nights. I find it to be the most unique, original, and beautiful.

Tasini – Are you currently working on anything new?

Folberg – The problem of being an artist is not only making art, but also promoting it. So recently I have been really working to promote my last series, Serpent’s Chronicle. I just got a book published with Abbeville Press, and an exhibition is opening at the Rubin Museum in Tel Aviv this Sunday (July 21, 2013). I have exhibitions coming up in Toronto and Paris later this year and after that I hope to do some more image making. 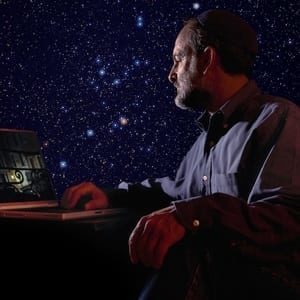 Neil Folberg was born in San Francisco in 1950 but spent most of his childhood in the Midwest. He became interested in photography around 1966 and soon after became a pupil of renowned photographer Ansel Adams at the age of seventeen. Folberg then continued his photographic education at the University of California at Berkeley and individualized study with landscape photographer William Garnett that led to a BA in Photographic Field Studies. In 1975 he married his wife and the following year they relocated to Jerusalem, where he began producing color landscapes throughout the deserts of Israel, Egypt, and Jordan resulting in his 1987 book, “In a Desert Land.”

Folberg was commissioned by Aperture to document synagogues in the Jewish Diaspora across the world leading to the book “And I Shall Dwell Among Them,” followed by a return to black-and-white in a series of night skies among ancient ruins of the Middle East, where separate images of the landscape and burned-in skies were digitally composited. This work was collected in the book, “Celestial Nights: Visions of an Ancient Land “ winner of the New York Book Show Prize, First Place Photography, 2002. “Travels with Van Gogh and the Impressionists” was published in 2005 and his latest work, “Serpent’s Chronicle,” represents a further evolution of Folberg’s interest in staged photography. Galleries worldwide have exhibited Folberg’s work and his photographs are in collections of the Los Angeles County Museum of Art, Yale University Art Museum, Bibliothéque Nationale in Paris, and the Israel Museum, among others.