A pioneer of experimental photography, Ilse Bing was a consequential artist whose work was influential to the modernist movement and expressive development of photography.

Ilse Bing: Queen of the Leica

In this video created by the Cleveland Museum of Art for their exhibition, Ilse Bing: Queen of the Leica, the viewer learns about Bing’s photography and how her career came to be highly regarded. Under the presentation of Barbara Tannenbaum, curator of photography for the museum, we proceed through the history of Binge’s career, from her beginnings as a photojournalist to being considered a full-fledged fine art photographer. 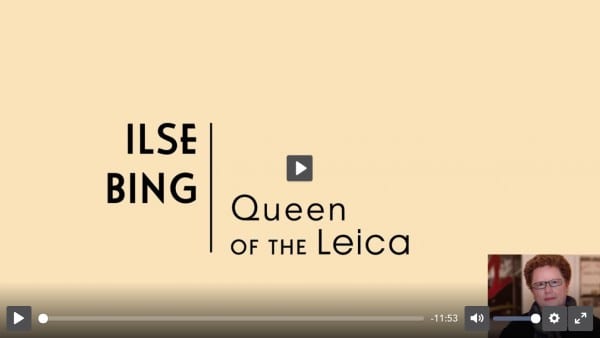 Ilse Bing was born and raised in Frankfurt, Germany. She moved to Paris in 1930 and experienced her most significant achievements in photography while living in the City of Lights. In Paris, Bing was immersed in the flourishing, experimentative art world of the period, surrounded by artists like Man Ray, Laszlo Moholy-Nagy, and Henri Cartier-Bresson.

An Unconventional View of Paris

Bing’s images of Paris were often “unconventional,” resembling Man Ray’s aesthetic. She used an experimental technique called “solarisation” of negatives, which reverses or alters the roles of dark and light tones. The effects of such techniques generated more conceptual, abstract images. Yet, Bing also frequently captured Paris in the more traditional, “straight-photography” style. She achieved success and notoriety for her work early on. An example of her renown was her participation in the Louvre’s first contemporary art exhibition in 1936. As the only professional photographer in Paris to use the 35mm Leica exclusively, respected photographer and art critic Emmanuel Sougez, dubbed Bing, “Queen of the Leica.”

With the outbreak of World War II in Europe, Bing and her husband, Konrad Wolff, an orchestra conductor, endured a troubling time. They were separated for over a month, forced into different internment camps. Later, Bing would rejoin her husband in Marseille, but by then, the two knew they had to leave Europe. Fortunately, they were able to receive visas with the help of the fashion editor at Harper’s Bazaar, a former Bing employer.

After she moved to New York City, Bing continued to make photography through the 1940s. However, after the 1950s, she took a long break from her craft and moved onto writing and drawing. She finally reignited her interest in photography in 1976, showing her work for the first time in 17 years at the Lee Witkin Gallery in New York. After her death in 1998, five major museums acquired the pictures in her estate.

Simple Pleasures: Photographs That Remind Us That it's Always 5 O'Clock Somewhere

Simple Pleasures: Photographs That Will Rock You