Photographer Neil Folberg presents his series Taking Measure in this video made available on YouTube by Vision Neil Folberg Gallery. Folberg’s latest series explores the relationship between man, nature, and the cosmos, as an extension of Celestial Nights, an earlier series of the artists’. In the video, Folberg describes his series by traveling to the Faroe Islands and including himself in his photographs for the first time in his career. He discusses witnessing a total solar eclipse and the transcendent experiences that arise from that which you cannot always see. Neil Folberg’s ideas explore the phenomena in nature and present philosophical inquiries of our human experience with earth and our surrounding environments. 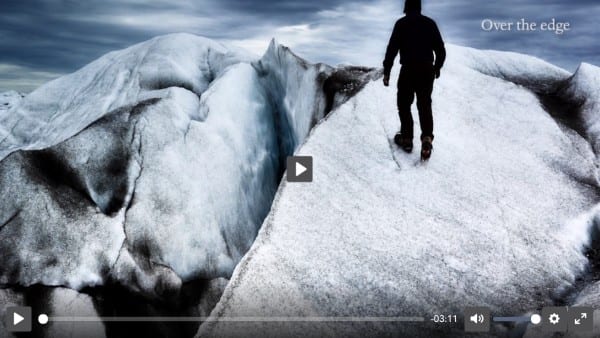 “I wanted it to be experiential. I wanted it to be something that people could put themselves into, which is an experience in journeying, looking, seeking, and trying to figure out exactly where you are and what are the phenomena that we’re seeing.”

Neil Folberg was born in San Francisco in 1950 but spent most of his childhood in the Midwest. He became interested in photography around 1966 and soon after became a pupil of renowned photographer Ansel Adams at the age of seventeen. Folberg then continued his photographic education at the University of California at Berkeley and individualized study with landscape photographer William Garnett that led to a BA in Photographic Studies. In 1975 he married, and the following year, they relocated to Jerusalem, where he began producing color landscapes of the deserts of Israel, Egypt, and Jordan, resulting in his 1987 book, “In a Desert Land.” Folberg was commissioned by Aperture to document synagogues in the Jewish Diaspora across the world, leading to the book “And I Shall Dwell Among Them.”

A Return to Black-and-White

This project was followed by a return to black-and-white in a series of night skies among ancient ruins of the Middle East, where separate images of the landscape and burned-in skies were digitally composited. This work is included in the book “Celestial Nights: Visions of an Ancient Land” winner of the New York Book Show Prize, First Place Photography, 2002. The world depicted in Celestial Nights here is composed of a delicately constructed order where earthly elements and the heavens mirror each other. Folberg sets an ancient land resonant with meaning against the awe-striking and eternal spectacle of the night sky. “Travels with Van Gogh and the Impressionists” was published in 2005, and “Serpent’s Chronicle,” represents a further evolution of Folberg’s interest in staged photography.

Galleries worldwide have exhibited Folberg’s work, and his photographs are in collections of the Los Angeles County Museum of Art, Yale University Art Museum, Bibliothéque Nationale in Paris, and the Israel Museum, among others. Folberg lives in Jerusalem, where he continues to produce work.

In Taking Measure, Neil Folberg returns to his interest in the environment; he wanted to make a new stand after exhausting his examination of his adopted country, Israel. Continuing to study man’s place within the cosmos – he chooses Iceland, a different part of the world for him, to explore. Here in this vastly different landscape, his ontological inquiries are performed. The topography becomes a stage, at once mysterious, at times beautiful or harsh, and ultimately unknowable. Two worlds, as external and as internal, are measured, scrutinized, traversed, and processed, eventually leaving a remarkable series of photographs as evidence.

“Although I savored the melancholy feeling of being in a starkly remote location at that moment, it didn’t prevent me from longing for that lost moment of totality – the satisfaction of witnessing the eclipse, that moment when the moon’s mountains are set against the blazing disk of the sun.”

Simple Pleasures: Portraits - Those We Know and Those We Don't