“This book is called 7439, which is the number of miles I rode through by motorcycle from New York to California, in the summer of 2015. The coast to coast is part of the American tradition of photography. I wanted to challenge myself and challenge my photography and see what it meant to go through a big country like America.”

Italian born photographer Renato D’Agostin has a passion for designing and producing fine art photography books. His work is often predicated on being able to create books of his images. In this following video by VSCO, available on YouTube, D’Agotin presents his book 7439. D’Agostin talks about the motivation behind creating his work, challenging himself through photography, and the connection between the darkroom and the photographer’s inner artistic spirit.

The photographer describes the experience of recording his journey from New York to California and expanding his imagination and visual vocabulary through his travels. D’Agostin describes the expanse of the Grand Canyon and the tumultuous chaos of storms in New Mexico as he traversed the landscape and captured images to later develop in the darkroom. In his book 7439, the photographer augments the American tradition of travel by presenting his unique vision of a mysterious, obfuscated, and abstracted American landscape. 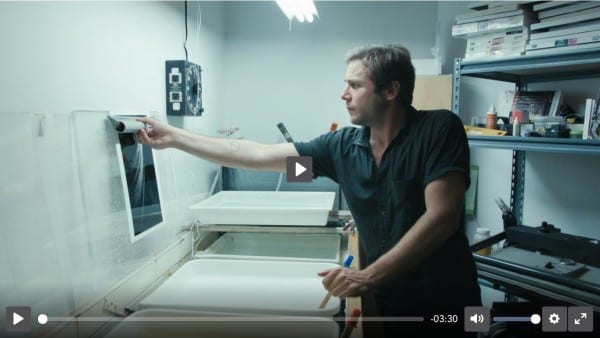 A New Perception of Space

Dislocating subjects from their environments, Renato D’Agostin depicts his perception of the space around him, examining the relationship between architecture and people. In the process, he opens a new portal in his and the spectator’s imagination. D’Agostin creates photographs seemingly removed from time and space. Architecture, objects, and landscapes are bracketed into shapes, shadows, and highly contrasted, grainy reproductions, offering a new abstraction of his surroundings. Through minimalistic, black and white silver gelatin prints, D’Agostin’s graphic vision recalls the grandiose language of Ansel Adams landscapes with the experimentative nature of Moriyama, Siskind, or Minor White.

From Italy to New York and Back to Italy Again…

Renato D’Agostin was born in 1983. He started his career in photography in Venice, Italy, in 2001. The atmosphere of city life nourished his curiosity to capture life situations with a camera. In 2002, he journeyed through the capitals of Western Europe. After a period in Milan, where he worked with the production studio Maison Sabbatini, he moved overseas to explore photography in New York. In this dynamic city, he had the chance to meet photographer Ralph Gibson and later become his assistant and printer of choice. After 13 years of living and working in New York, D’Agostin returned to his motherland Italy in 2018, setting up a studio in a warehouse in the outskirts of Venice.

In 2007, he presented Metropolis at the Leica Gallery in New York. Other exhibitions followed in the United States, Europe, and Asia in the years after. His works have been published in numerous books. Some of his prints have become part of public collections such as The Library of Congress and The Phillips Collection in Washington DC, the Internation Center of Photography in New York, LACMA in Los Angeles, as well as the Center for Creative Photography in Arizona and the Maison Europeenne de la Photographie in Paris, among others.

Simple Pleasures: Portraits - Those We Know and Those We Don't

Simple Pleasures: Photographs That Remind Us That it's Always 5 O'Clock Somewhere