Sandy Skoglund is an internationally acclaimed artist whose work explores the intersection between sculpture, installation art, and photography.

Her large-format photographs of the impermanent installations she creates have become synonymous with bending the ordinary perception of photography since the 1970s. Her constructed scenes often consist of tableaux of animals alongside human figures interacting with bright, surrealist environments. Skoglund’s blending of different art forms, including sculpture and photography to create a unique aesthetic, has made her into one of the most original contemporary artists of her generation.

“With still photography, with one single picture, you have the opportunity like a painter has of warping the space. I started to take some of the ideas that I had about space, warping the space, what do you see first? This idea of filing up the space, horror vacui is called in the Roman language …means fear of empty space, so the idea that nature abhors a vacuum. So anytime there is any kind of openness or emptiness, something will fill that emptiness, that’s the philosophical background. For me, I just loved the fun of it the activity of finding all of these things, working with these things.” 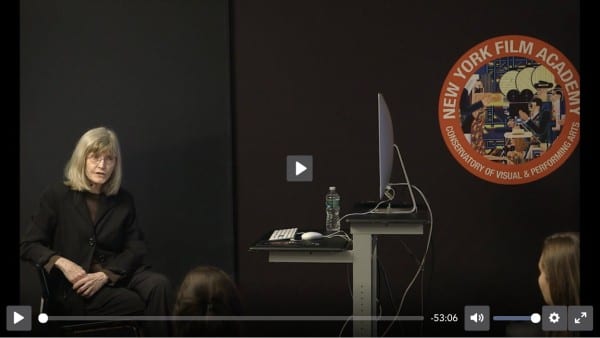 As part of their monthly photographer guest speaker series, the New York Film Academy hosts photographer and installation artist Sandy Skoglund for a special guest lecture and Q&A.  In this lecture, Sandy Skoglund shares an in-depth and chronological record of her background, from being stricken with Polio at an early age to breaking boundaries as a conceptual art student and later to becoming a professional artist and educator. She shares her experiences as a university professor, moving throughout the country, and how living in a mobile home shaped her art practice through photographs, sketches, and documentation of her work. This delightfully informative guest lecture proves to be an insightful, educational experience especially useful for students of art and those who wish to understand the practical and philosophical evolution of an artist’s practice.

In this lecture, Sandy Skoglund explains her thought process as she creates impossible worlds where truth and fiction are intertwined and where the photographic gaze can be used as a tool to examine the cultural fascinations of modern America.

Sandy Skoglund was born in Weymouth, Massachusetts. She studied art history and studio art at Smith College in North Hampton, Massachusetts, later pursuing graduate studies at the University of Iowa. While moving around the country during her childhood, Skoglund worked at a snack bar in the Tomorrowland section of Disneyland and later in the production line of Sanders Bakery in Detroit, decorating cakes for birthdays and baby showers. These experiences were formative in her upbringing and are apparent in the consumable, banal materials she uses in her work. Experimenting with repetition and conceptual art in her first year living in New York in 1972, Skoglund would establish the foundation of her aesthetic. Using repetitive objects and carefully conceived spaces, bridging artifice with the organic and the tangible to the abstract.

Skoglund has often exhibited in solo shows of installations and photographs as well as group shows of photography. Esteemed institutions such as the Brooklyn Museum, the Centre Georges Pompidou, the Chicago Art Institute, the Los Angeles County Museum of Art, the Metropolitan Museum of Art, and the Whitney Museum in New York all include Skoglund’s work. She is a recipient of the Koopman Distinguished Chair in the Visual Arts for Hartford Art School, the Trustees Award for Excellence from Rutgers University, the New York State Foundation for the Arts individual grant, and the National Endowment for the Arts individual grant.

Sandy Skoglund has created a unique aesthetic that mirrors the massive influx of images and stimuli apparent in contemporary culture. She painstakingly creates objects for their part in a constructed environment. The work begins as a project that can take years to come to completion as the handmade objects, influenced by popular culture, go through an evolution. Skoglund organizes her work around the simple elements from the world around us. Cheese doodles, popcorn, French fries, and eggs are suddenly elevated into the world of fine art where their significance as common materials is reimagined. The carefully crafted environments become open-ended narratives where art, nature, and domestic spaces collide to explore the things we choose to surround ourselves within society. Skoglund treats the final phase in her project as a performance piece that is meticulously documented as a final large-format photograph from one specific point of view. A full-fledged artist whose confluence of the different disciplines in art gives her an unparalleled aesthetic, Skoglund ultimately celebrates popular culture almost as the world around us that we take for granted.

The Fictional Reality and Symbolism of Sandy Skoglund

The Constructed Environments of Sandy Skoglund