View cart “Castello di Sammezzano III, Reggello” has been added to your cart.
← PREV
NEXT →

The magnificent Franciscan convent built in the Spanish Baroque style in the historical heart of Lima is not only one of the largest monuments to Lima’s colonial past, but perhaps also its most characteristic. It was a centre of the mission with which the Franciscans were charged on behalf of the Spanish crown and for which they were suitably equipped – books having always been considered the monk’s spiritual tools. Faced with the challenge of conquering new territories, a monastery without a library would have struck the Franciscans as a fortress without an armoury. The convent was thus furnished upon its foundation with a basic stock of codices that were sent across from Europe, and which enabled it to develop into a Spanish centre of expertise in multiple spheres of learning. The library was an expression of the complex association which at that time existed between religion and rule, and served as an educational resource for the whole city, newly founded by the Spaniards on the ruins of the destroyed Inca Empire. Its holdings comprise not only standard works on Church history and theology, philosophy and the sciences, but also late medieval hymn-books, Bibles and dictionaries, including the first dictionary of the Spanish language compiled by the Royal Spanish Academy. Numerous documents and archival materials attest to the administrative-type functions performed by the Franciscans at Inquisition trials. The monastery is thought to have been connected to the archbishop’s palace and the Inquisition tribunal via secret under­ground passages, probably part of the extensive network of catacombs beneath the church of San Francisco. Today, the imposing library with its documents and papers bears witness to this complex history. Books and files, in some cases loosely stacked, line the walls of the room, which is situated on the top floor and is lit via overhead windows. Spiral staircases and low doors in the corners of the room provide access to the upper galleries. The floor tiles, like those in the cloisters, come from Seville and provide a colourful contrast to the dark cedar furnishings. – Massimo Listri’s The Worlds Most Beautiful Libraries, Taschen 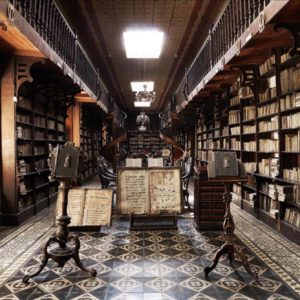