In 1880 work began on a magnificent new library in the centre of Rio de Janeiro, the former capital of the Empire of Brazil, independent since 1822. The library was built to mark the tercentenary of the death of Luis de Camoes (1524-1580), the Portuguese national poet after whom the street on which it stands is named. The aim was to nurture and spread Portuguese culture, just as the first Gabinete Portugues de Leitura had done since its foundation in 1837. At that time a group of 43 Portuguese immigrants, made up chiefly of merchants but also including a number of political refugees, had joined forces to establish a reading room in their

native language – a boutique a lire as had become the fashion in post­ Revolution France and which found expression in America in Masonic libraries. In the new library built between 1880 and 1887, however, a new aspect played a role: memoria. For the Portuguese colony of Brazil, its European roots had by now probably become an idealised memory and the heroic period of Portuguese voyages of discovery was now to be evoked for future generations by way of a magnificent work of historicist architecture. The entire building is hallmarked by sumptuous Manuelline ornamentation and an architecture that recalls particular aspects of the Portuguese Late Gothic. Inside the library, which is laid out over two storeys, these characteristics are found not only in the carved decor of the bookshelves and the galleries running right around the walls, but also in the cast-iron roof construction, through which the interior is lit from above. The decorative architectural elements, carved in limestone, were produced in Portugal and shipped to Brazil ready for installation. The fa9ade of the Brazilian library is in fact a copy of probably the most famous building in Portugal, the early 16th-century monastery of the Hieronymites in Lisbon. A symbol of national identity, the monastery houses the funerary monuments of King Manuel I (1469-1521) and his family, as well as those of Vasco da Gama (c.1469-1524) and Luis de Camoes (c.1524-c.1579). A first edition of the latter’s main work, the Portuguese epic poem Os Lusiadas (The Lusiads), is one of the Reading Room’s greatest treasures. The library also houses historically valuable original editions of chronicles of Portuguese discoveries. Since the Reading Room – distinguished by the title “Royal” since 1906 – receives deposit copies of every book published in Portugal, it today houses the largest collection of Portuguese books outside Portugal.  – Massimo Listri’s The Worlds Most Beautiful Libraries, Taschen 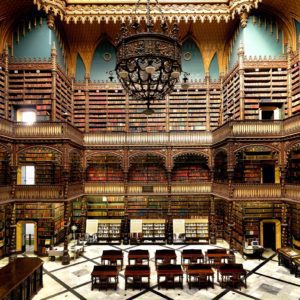