The Mafra Palace library is considered one of the most magnificent Rococo library buildings in the world. Designed in the style of a monu­mental hall by royal court architect Manuel Caetano de Sousa 0742-1802) and situated in the west wing of the vast palace of the Portuguese kings, the library was completed in 1771 and today serves as a museum, with its historical appearance intact. Coffered barrel vaults and a central cupola soar overhead, reflecting the daylight generously entering through numerous windows. Galleries with high balustrades run round all sides of the room, whose walls arc lined with bookcases, lending it a compact, homogeneous appearance despite its size. In the absence of gilded and painted decoration, which was not part of the original design, light colours dominate, and together with the lavish, polychrome marble floor, they bring out the finely worked Rococo ornamentation to great effect. For the carvings, the most precious woods from the Portuguese colonies were used. The historical holdings, inventoried by the monks in the convent attached to the palace, include a number of valuable, unique manuscripts such as musical works composed especially for the famous six organs in the palace basilica. Amongst these are scores by the royal music teacher Joao de Sousa Carvalho {1745-1799) and his pupil Marcos Portugal (1762-1830). Alongside Coimbra, the Mafra was the second of the magnificent libraries completed during the reign of Joseph I (1714-1777). who here again fulfilled the wishes of his father, John V

(1689-1750), by finishing this building project. In 1711 the Portuguese king, who had married Archduchess Maria Anna Josepha (1683-1754), a daughter of Emperor Leopold I (1640-1705), vowed to build a palace and convent dedicated to St Anthony should he be blessed with a male heir. The foundation stone for the new royal residence, designed on a grand scale by the Swabian architect and goldsmith Johann Friedrich Ludwig (1673-1752), was laid in 1717. Situated outside the royal capital of Lisbon and instead set in the royal hunting grounds at Mafra, the palace incor­porated a Capuchin monastery and a palace church as part of a single complex built around several courtyards, on the model of the Escorial in Spain. IL not only surpassed the Spanish example in scale, but was also quite different in its decor, which in Mafra is sumptuously opulent, in contrast to the Escorial. The gigantic project was made financially pos­sible by the enormous quantities of gold arriving from the Portuguese colony of Brazil and the building work was accomplished within a short space of time by the use of a conscripted workforce of thousands of labourers and members of the military. The church was consecrated in 1730 and 300 Capuchin monks were provided with accommodation in the wings on either side of it. In 1745 Pope Benedict XIV (1675-1758) issued a papal bull granting special rights to the Royal Library of Mafra, including permission to house titles on the Index of Prohibited Books and to grant access to them at the king’s discretion. The building project would earn the Portuguese kings of the House of Braganza the title of “Most Faithful Majesty”.  – Massimo Listri’s The Worlds Most Beautiful Libraries, Taschen 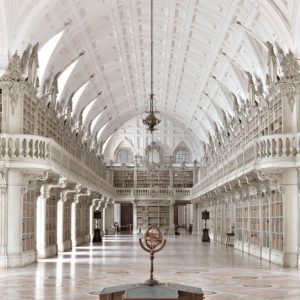