Signed, titled, dated and editioned out of 5 on artist’s label on verso.

The massive quadrangle of Seitenstetten Abbey, which was rebuilt in its present form between 1718 and 1742 by monastery architect Josef Munggenast (1680-1741), still conveys a sense of its fortified medieval nucleus. With the assistance of the see of Passau and its bishop Ulrich I (c.1027-1121), a canonry was first founded here around 1112 and settled in 1114 by Benedictine monks from Gottweig. Extensive landholdings, and a secure income from iron mines and saltworks, enabled the abbey to establish itself in the Middle Ages as an important economic and cultural centre. A monastery school operated here from the 12th century onwards, but although the abbey also maintained a library, it was destroyed by fire on several occasions. Systematic steps to build up a library were only taken as a consequence of the reform movement initiated at Melk, which spread to Seitenstetten in 1437 and which placed study and learning at the centre of monastic life. The man­uscripts acquired in the wake of this spiritual renewal today represent the library’s oldest holdings. Even earlier liturgical manuscripts, originally also kept at Seitenstetten, have today passed into other collections,

such as the Morgan Library in New York. The core holdings of the abbey library nevertheless date largely from the Baroque era; the collections of sermons dominating the acquisitions of the early 17th century were joined from the middle of that century by works on theology, philosophy and church history. The introduction of white bindings during these

years suggests that an impressive visual impact was already one of the considerations in the way the books were displayed. Josef Munggenast, who as the successor to Jakob Prandtauer (1660-1726) was responsible for the remodelling of a series of medieval monasteries in the Danube region, transformed the Romanesque and early Gothic abbey into a mag­nificent complex enclosing several courtyards. With its grand reception rooms it offered the prelates of the Baroque era an architectural frame­work befitting their status. Particular importance was thereby attached to the library, which rises through two storeys in the south wing. The monumental ceiling fresco by Paul Troger (1698-1762) depicts the Book with the Seven Seals described in the Revelation of St John. The clear layout of the approximately 17,000 books in the main hall, located there since 1763, results from their uniform bindings and lettering as well as their strict arrangement by size. The adjoining rooms, housing the refer­ence library, study room, natural history collection and coin collection, were completed in 1777. – Massimo Listri’s The Worlds Most Beautiful Libraries, Taschen 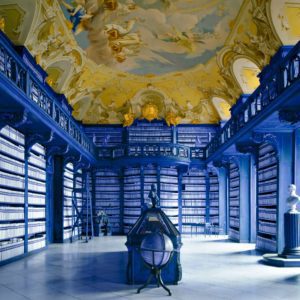