The former monastic library owes its name to Genevieve, the patron saint of Paris, who in 512 was buried next to the 6th century monastery founded by the Merovingians, in the church that now bears her name. Documentary information about the library only surfaces from 1148,

however, when the influential Abbot Suger of Saint-Denis (1081-1151) dis­patched Augustinian canons to Sainte-Genevieve and charged them with running the monastery library and a scriptorium. A number of manu­scripts from these historical holdings, with the abbey’s ownership mark, still survive today. A library catalogue from the 13th century shows that at this stage the library already contained 226 codices. Important centres of scholarship began to develop not only in Sainte-Genevieve but also in the nearby abbeys of Saint Germain-des-Pres and in particular Saint-Victor. These would lay the foundation stone of intellectual life in the so-called Quartier Latin, the student quarter which in the Middle Ages sprang up around the university outside Paris’s city walls. The Bibliotheque Sainte­Genevieve continues Lo serve the purposes of study today as the Paris l Pantheon-Sorbonne university library, with holdings that have meanwhile grown to two million media units. In 1624 Louis XIII (1601-1643) re-founded the library, whereby it not only gained in prestige as a “royal” library, but also in substance. Donations from private individuals and institutional bodies enriched its holdings, which from now on assumed an encyclopedic range, while its catalogue was conceived on the model of the king’s private library. The library was opened to the public from the early 18th century and with its 60,000 printed works and 2,000 manuscripts even became an attraction for scholarly tourists. Its public mission may have been one of t he reasons why the Bibliotheque Sainte Genevieve survived the Revolution years intact, although the abbey in which it “as housed was dissolved and converted into a school, parts of which are still preserved in today’s Lycee Henri IV. The new abbey church that had been built by Jacques-Germain Sou mot (1713-1780) from 1764, on top of the Sainte Genevieve hill, was turned into the secular Pantheon, the national hall of fame. The library, still housed in the remains of the old abbey, was renamed the “Bibliotheque du Pantheon”, and valuable books from dissolved monasteries and confiscated private libraries were transferred here. These events from the Revolutionary period arc still reflected in the different provenances of the holdings. In 1844 work began on a new library building opposite the Pantheon, designed by Henri Labrouste (1801 -1875); when it opened in 1851, the reading room contained 65,000, volumes with a further 40,000 in the ground-floor stacks. Ground­-breaking features included not only the iron-frame construction that was a prerequisite for the gas lighting, and which was here visibly employed in a monumental hall for the first time, but also the typology of the design: an independent library building with book stacks at ground level and reading room lit from all sides, with books running all the way round the walls and a gallery on the upper level. Interior and facade would exercise a great influence upon later library buildings; in Paris, Labrouste was subsequently commissioned to design a new reading room for the Bibliotheque Nationale. – Massimo Listri’s The Worlds Most Beautiful Libraries, Taschen 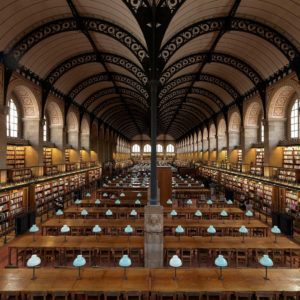