We can often take the interior spaces of a home for granted because of the comfort it provides. We generally accept the living room as a safe, orderly, and predictable environment. But what if we reimagined this formative space of a home in a different way? In, The Living Room, American artist Sandy Skoglund investigates and redefines a home’s primary gathering space, the living room. She creates a fictional environment that elevates the viewer’s capacity for interpretation and exploration. Skoglund ultimately reimagines an alternative reality and subverts how one typically reads a photograph.

Born in Weymouth, Massachusetts, Sandy Skoglund moved around the U.S., including Maine, Connecticut, and California in her earlier years. Throughout her youth, Skoglund worked at a snack bar in the Tomorrowland section of Disneyland, on the production line at Sanders Bakery in Detroit, decorating pastries with images and lettering, and then as a student at the Sorbonne and Ecole du Louvre in Paris, studying art history. These experiences undoubtedly influenced the formation of her art practice. Through studying art, reading Kafka and Proust, and influenced by French New Wave cinema, Skoglund began to conceptualize a distinct visual rhetoric. Eventually, Skoglund graduated from Smith College and later pursued a Master’s degree in painting at the University of Iowa. The aesthetic Skoglund has developed brings into question accepted cultural norms. Moreover, Skoglund employs complex visual techniques to create fantastic sculptures, make surreal installations, and meticulously photograph the results.

“Sandy Skoglund shapes, bridges, and transforms the plastic mainstream of the visual arts into a complex dynamic that is both parody and convention, experiment, and treatise.” – Judith Van Baron, PhD

American Sensibilities in the Home

“My work involves the physical manifestation of emotional reality… Ordinary life is an endless source of fascination to me in its ritualistic objects and behavior.”

“Lawns are the most grown crop in the U.S. – and they’re not one that anyone can eat; their primary purpose is to make us look good and feel good about ourselves,” writes a headline in a 2017 blogpost of the scientificamerican.com. Another headline poses the prompt, “Why people care about pets more than other humans,” published by wired.com in 2015. These American cultural proclivities are magnified and scrutinized under Skoglund’s visual rhetoric through design elements that signify the symbolic references in her photographs.

The Symbolic Potential of Color

The repeated sculptures of dogs emerge strikingly through the image. Meanwhile, the furniture items resemble intricate topiaries that can act as small monuments to the middle-class home. A couple, a man and a woman, who appear more like a catalog advertisement, lounge by an unlit fireplace. These topics of American’s obsession with perfectly manicured lawns and the overwhelming love of dogs are examined with green turf acting as a bed for the dreamlike assortment of dogs. Even 20 years after the piece was created, these issues are still relevant, highlighting Skoglund’s adroitness at parodying cultural conventions.

“This installation investigated the concept of the naturally unnatural in behavior… I did research on dogs (and I) was always interested in animal consciousness in contrast to human consciousness.” – Sandy Skoglund.

As a passionate artist, who uses the mediums of sculpture, painting, photography, and installation, and whose concepts strike at the heart of American identity, Skoglund’s work opens doors to reinvention. As a conceptual art student and later a professional artist and educator, Sandy Skoglund creates work that reimagines a world (and a living room) of unlimited possibilities. In conclusion, The Living Room is a poetic and dreamlike space that suggests the ever-present potential to create alternative realities.

“The origins of my interest in mixing natural and artificial arise from my being a spectator of myself as I behave in the world. I see myself attracted to some very artificial things, almost as if my life depended on it. … I mean delicious cookies to eat, fragrant creams to put on my skin, or exciting fabrics and colors to wear. To me, a world without artificial enhancement is unimaginable, and harshly limited to raw nature by itself without human intervention.” – Sandy Skoglund. 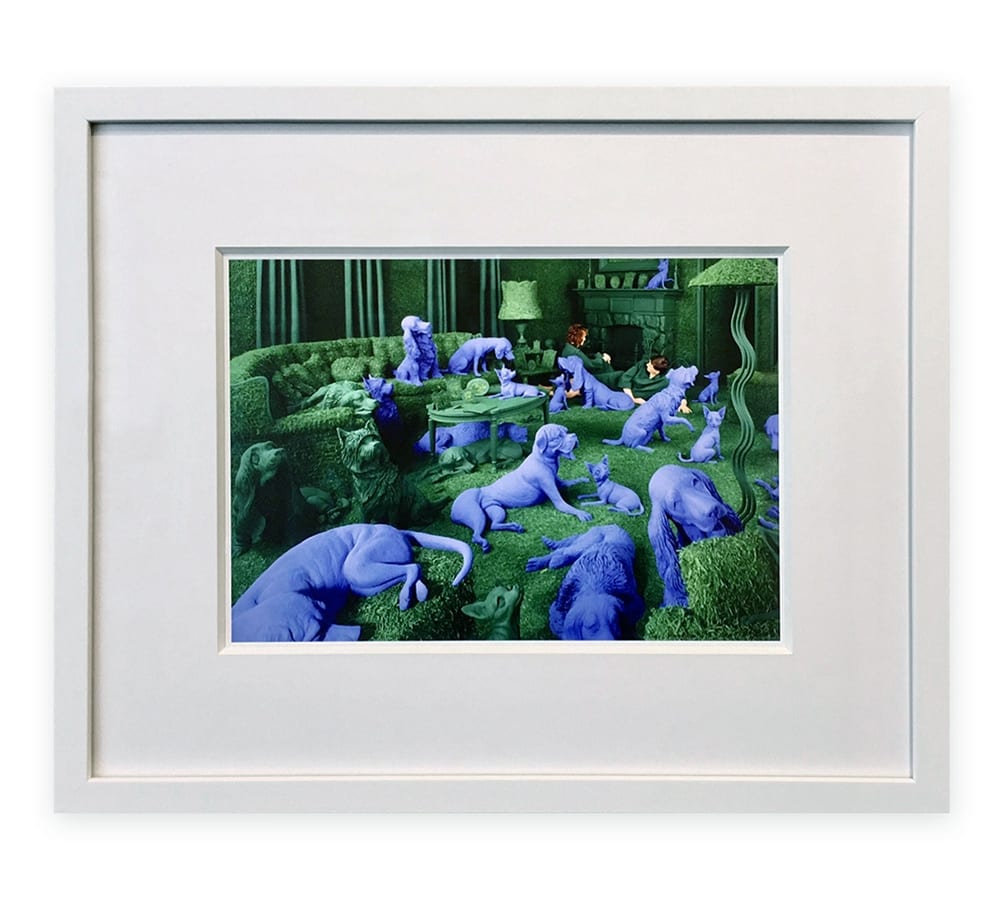 *Note “The Living Room” is a newly printed image in an edition of 12. It measures a framed size of 12″ x 16″. It is exclusively made for Holden Luntz Gallery collectors.

Simple Pleasures: Photographs that Serve Up the American Dining Culture

The Constructed Environments of Sandy Skoglund