For over sixty years, Sabine Weiss’s name has been synonymous with the seminal era of French Humanist photography. A living legend, with numerous prestigious one-person exhibitions held for her at major museums through the world, Weiss’s images from 1950s Paris speak of a postwar time when a feeling of hope and “joie de vivre” that could be felt in the people populating the city’s cafes, squares, streets, and in all corners throughout Paris. Weiss would photograph individuals going about their daily lives capturing their emotions and creating a style that combined spontaneity and informality, backed by the photographer’s intuition and a knack for seeing and celebrating the joys of life.

“I take photographs to hold on to the ephemeral, capture chance, keep an image of something that will disappear, gestures, attitudes, objects that are reminders of our brief lives. The camera picks them up and freezes them at the very moment that they disappear.” 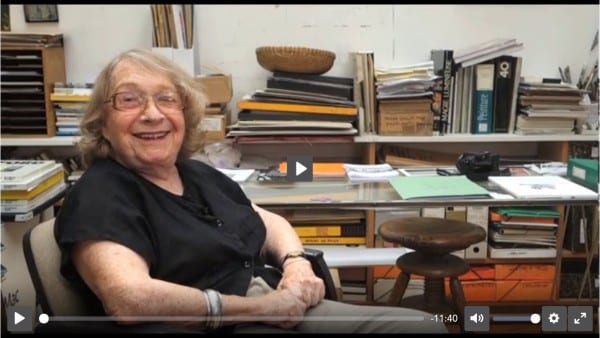 In a particularly timely video that shares the essence of Humanism, we encourage you to sit back and reminisce with Sabine Weiss, the remarkable and invaluable artist from a generation of photographers who dedicated their work to find and celebrate the simple moments of humanity.

Weiss shares personal anecdotes and talks of finding a life’s purpose in pursuing photography in this video (made for Paris Photo). The Swiss-born nationalized French photographer is the last remaining practitioner of the French Humanists. The humanists are a genre characterized by spontaneous, candid, and emotionally engaging photographers that captured moments from everyday life, all strewn together through a focus on a universal underlying human nature.

Through a thick French accent and a warm personality, Sabine Weiss recounts starting her career in the world of photography, working with classic French icons like Brigitte Bardot, Jeanne Moreau, and Francois Sagan to capturing the everyday occurrences of the citizenry. She speaks of working in Gypsy communities, the role religion has on society and her work, and her love of capturing children at play. Weiss’s work crystallized the congeniality of the human experience. Her photographs recorded the aftermath of a city finding joy within itself, rekindling its spirit, while leaving the sadness and conflict of World War II behind.

“You know, there is a period also from after the war, where people had been happier than now in Paris, with time to walk in the streets and take pictures from what we see, it is very simple. It is now good to know a bit of how it was before, more children on the street and people you know, doing things on the street.”

Born in Switzerland, Weiss moved to Paris in 1946, where she first assisted fashion photographer Willy Maywald, learning much about composition and the technical aspects of photography. Her meeting with Robert Doisneau in 1952 in the offices of Vogue was decisive, as it led her to join the influential Rapho agency that would exhibit her work, and she signed a nine-year contract as a Vogue photographer. During that period, she would develop her permanent focus on humanity, making her one of the few reportage photographers whose work combined everyday poetry with sharp social observation. Weiss traveled the world and published a large number of reports in a range of magazines, such as TIME, Life, Newsweek, Town and Country, and Paris Match. In 1955, Edward Steichen selected three of her photographs for The Watershed Family of Man exhibition.

“I love this constant dialogue between myself, my camera and my subject, which is what differentiates me from certain other photographers, who don’t seek this dialogue and prefer to distance themselves from their subject.”

Sabine Weiss’s photographs, as with many of her Humanist counterparts, serve as an epilogue to the senseless suffering caused by war. With images that present a modern sense of equality and universal humanity, they create a new normal, making “joie de vivre” as the central tenant of the human condition.