“I have always been fascinated with large scale artwork, large scale photography, large scale paintings. I always enjoyed, since my early days in London, to visit galleries and be taken away from reality by seeing incredibly large-scale works.” 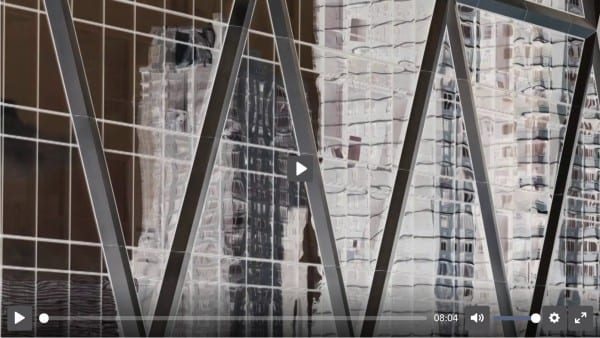 This video by London based Brazilian-German photographer, André Lichtenberg, introduces his Within Series, describing the bold nature and personal depth of his unique and immersive body of work. While standing with one of his photographs, Lichtenberg recalls his fascination with large-scale artworks and the childhood memories that influenced the creation of the Series.

In the video, Lichtenberg discusses creating his inverted cityscapes, which are made from hundreds of architectural photographs. These large-scale landscapes explore our understanding of famous cities like Paris, London, or New York City from different perspectives. Their inversion and meticulous detail evoke the effects memory has on our conceptions of place and use technology to craft a new method of representation for these historical urban compositions.

Lichtenberg was born in the south of Brazil to mixed European heritage. As a child, he grew up in the expansive urban architecture of Porto Alegre and frequently traveled with family, influencing his future work. Saying of his travels during our interview with Lichtenberg:

We also had occasional trips to the seaside and hilly countryside and I really enjoyed those landscapes. My father used to draw romantic European scenes in a very realistic style – mostly rural landscapes involving alpine style mountains and lakes. We had some of his framed drawings decorating the house. The mixture of urban architecture and romantic landscapes influenced me.

Lichtenberg recalls his architectural drawings made as a child, saying,

“I used to draw buildings and cityscapes from a bird’s eye view as if I were on the rooftop of a very tall building or complex motorway junctions as seen from a helicopter. There was a sense of precision in those pictures, an almost mathematical precision.”

His educational background in the sciences also influences his style, studying Civil Engineering before receiving degrees in the photographic arts and sciences.

“Another thing I remember in my childhood was the occurrence of small blackouts. You know, playing with my friends in the street and suddenly poof! A street generator would blow, and the whole city would darken itself up. Suddenly everything would get quiet; little radios plugged into the mains would go off. I remember a kind of certain magic around those blackouts. They would last a bit long, suddenly there would be little candles in city windows, in houses. Again, almost if the city was beginning to be lit from within.”

His project, Within Series, has been awarded two grants by the Arts Council England, selected for the Aesthetica Art Prize in the UK, and exhibited as a major solo show in Brazil. He has worked with publications such as the Sunday Times (London) and Le Monde (Paris). His images have been recognized with several international prizes and awards including the Aesthetica Art Prize, Renaissance Photography Prize, and AOP Awards, and exhibited in prestigious art spaces, including the Museu da Republica (Rio de Janeiro – Brazil), Centro Cultural Sao Paulo (Brazil), The Photographers Gallery and the Barbican Centre (London). In 2015, Lichtenberg was invited to collaborate with the Centre Pompidou/IRCAM in Paris. There he had one of his artworks from the Licht Series illustrating the cover of the festival catalog and a three-meter print displayed outside the famous Parisian building and square. His images have crafted their way into numerous international private and corporate collections.

A Merger of Art and Science

Lichtenberg’s photographs recreate the city. We see the parts and the whole. In the finished picture, we sense an accumulation of energy acting to weave together the almost countless elements that these city landscapes contain. The large-scale composite renditions address issues of process, technology, and remembrance. The sheer process of presenting so much detailed information is perhaps a metaphor for extended dialogue. The parts of the whole all relate to one another either through form or subject. In his quest through memory and photography, Lichtenberg merges art and science to explore and expand on new ways of seeing.