Karen Knorr: A Conceptual Photographer and a Practitioner of Magical Realism

Karen Knorr is both a conceptual photographer and a practitioner of Magical Realism. Knorr’s work visualizes the symbolism of parables and mythologies, investigating the power of images. Her use of animals has become a dominant feature in her work. With a large-format camera, she photographs architectural interiors and animals separately, joining them through editing software.

“I take artistic license, I want an intense visual effect, and I want people to be curious. I want to use the beauty of the image to seduce people. To make them think and be curious about what I am representing…”

Knorr speaks about being a photographer for over 40 years, how education shaped her career, studying under Victor Burgin, and using texts with images. Knorr also talks of her different series, her collaborative experience with photographer Olivier Richon, and digitizing her work in the 90s while becoming a wildlife photographer among other subjects. 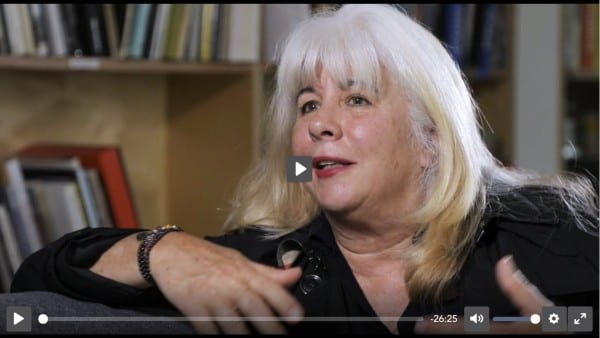 This intriguing and enjoyable conversation between two successful and original contemporary photographers provides an uplifting and unique view. It can help the viewer gain insight on how to talk about photography and the evolution of a photographer’s career.

In Knorr’s mythological visual realm, the animals contain a mystery and an allegorical component that become anthropomorphic. While she presents historical backdrops populated by elements from the animal world, she is interested in the juxtaposition of both aspects in her finished pictures. She is aware of the history of aristocratic interiors and institutions and selects culturally significant, refined locations. Her photographs call into question our assumptions of reality, how we live in and use domestic spaces, and how we relate to the greater world of nature. They create visually complex, vibrant, and seductive open-ended narratives.

Karen Knorr was born in Frankfurt, Germany, coming from a European and American heritage. She was raised in San Juan, Puerto Rico, in the 1960s and later finished her education in Paris and London. Karen has taught, exhibited and lectured internationally, including at Tate Britain, Tate Modern, The University of Westminster, Goldsmiths, Harvard, and The Art Institute of Chicago. She studied at the University of Westminster in the mid-1970s, exhibiting photography that addressed cultural studies and film theory debates. She is currently Professor of Photography at the University for the Creative Arts in Farnham, Surrey.

Karen Knorr’s earlier series of black and white photographs with ironic and often humorous texts highlighting aspirations, lifestyle, and the British class. Her renowned work, Gentlemen (1981-1983), was photographed in Saint James’s clubs in London. This series investigated the patriarchal, conservative values of Britain during the Falklands war.

Knorr’s work developed a critical and playful dialogue with documentary photography. She uses different visual and textual strategies to explore her chosen subject matter. The topics she studied ranged from family to lifestyle to animals and their representation in the museum context.

Her series Fables (2004-2008) mixes analog and digital photography, playfully reconfiguring mythology and fables. Fables by Ovid, Aesop, and La Fontaine are combined with popular culture using Disney and Attenborough within heritage sites. The potent imagery within these photographs is rich with reference to the baroque. Furthermore, in the last section of the work, Knorr interrogates the free-flowing space of modern architecture.

Since a life-changing journey to India in 2008, Karen Knorr’s work explores Rajput and Mughal cultural heritage. India Song, a series of carefully crafted photographs, explores the past and its relation to India’s contemporary heritage sites across Rajasthan. Given these points, the work studies cultural heritage and its relationship to both feminine subjectivity and the restrictions that civilization place on our personal freedoms.

Knorr’s photographs, taken as a whole, are part real, part imagined, and part dream. They have a beauty, a power, and a mystery that makes them captivating.