“One must always take photos with the greatest respect for the subject and for oneself.”

Legendary photographer Henri Cartier-Bresson changed the landscape of photography with his ideology of the decisive moment. Bresson’s intuitive style and observational acuity heightened the potential for photography’s capacity to capture inimitable moments in human life. As one of the founding members of Magnum Photos, arguably one of the best-known photographic agencies in the world, Bresson’s body of work proliferated throughout the post-war world and forever influenced the course of photography. Considered a master of candid photography, Bresson would continue to travel the world and create arresting pictures that highlighted the amusing human peculiarities that connect the world.

“To me, photography is the simultaneous recognition, in a fraction of a second, of the significance of an event as well as of a precise organization of forms which give that event its proper expression.”

The following video, Henri Cartier Bresson – The Decisive Moment, viewable on YouTube, shares some of Bresson’s most renowned pictures alongside the photographer’s narration. As slides of the images pass one by one, Cartier-Bresson speaks anecdotes, personal beliefs on art, and the history behind his pictures. The video is an enlightening experience that takes us into the mind of one of history’s most influential photographers. 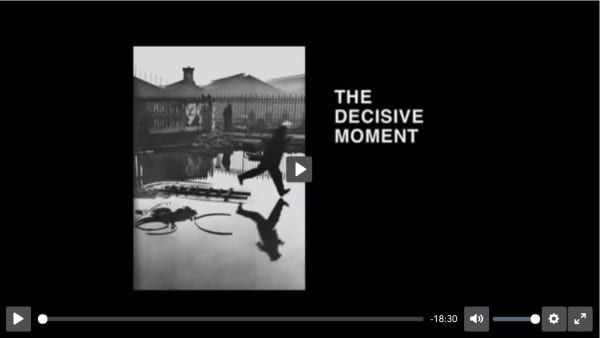 Born in France in 1908, Bresson was the son of a wealthy textile merchant. He studied painting at André Lhote’s academy in Montparnasse in 1927, and soon after that entered the bohemian world of the Parisian avant-garde.

In 1931, he began to use a camera and to make photographs that reveal the influence of both Cubism and Surrealism: bold, flat planes, collage-like compositions, and spatial ambiguity as well as an affinity for society’s outcasts and the back alleys where they lived and worked. Within a year, he had mastered the miniature 35mm Leica camera. He began traveling in Italy, Spain, Morocco, and Mexico, developing what would become one of the hallmarks of 20th-century photographic style.

Although such photographers influenced him as Eugène Atget and André Kertész, his photographic fusion of form and content was groundbreaking.

“It is instructive to note that Cartier-Bresson only admitted to having been influenced by one photograph during his whole life: a 1930 image by Munkácsi that depicts three boys who momentarily allude to the pose of the Three Graces as they charge into the surf. The picture showed Cartier-Bresson how he might capture “eternity through a moment.” – Mary Warner Marien

In his 1952 landmark monograph “The Decisive Moment,” a consequential book that still today carries enormous influence as one of the most cited in the history of photography.

Cartier-Bresson was drafted into the French army in 1940. He was taken prisoner by the Germans but escaped on his third attempt and joined the French Resistance. In 1946, he assisted in preparing a “posthumous” show of his work organized by the Museum of Modern Art in New York in the mistaken belief that he had been killed in the war. The following year he founded the Magnum photo agency with Robert Capa, David “Chim” Seymour, and others. He spent the next twenty years on assignment, documenting the great upheavals in India and China and traveling to the Soviet Union, Cuba, Canada, Japan, and Mexico. He left Magnum in 1966 and then devoted himself primarily to painting and drawing until his death in 2004.

An Icon in the Humanist Movement

Characterized by small, usually 35mm cameras and roll film, the decisive moment maintained an appreciation for the human experience and made Bresson one of the Humanist movement’s most iconic figures. His pictures could transmit a universal connection between the work and the viewer. His candid portrayal of life provided a memorable collection of iconic photography. Bresson’s influenced the aesthetic of photojournalism and other consequential photographer’s work like Robert Frank‘s The Americans. Ultimately, Henri Cartier-Bresson is one of the all-time great photographers who helped expand the emotive and expressive power of photography.

He has become one of the most widely collected photographers, whose works are included in the collections of major photographic institutions throughout the world.