Tasini – Your prints are highly labor intensive. Where did you first learn how to print in platinum and silver gelatin processes? Do you ever wish you had an assistant?

Massaia – Nowhere specifically. I consider my basement nowhere. I simply taught myself through trial and error. Many years ago I became very interested in a slew of handmade printing processes, and out of all the ones I experimented with, platinum and silver gelatin were the most appropriate fit for what I was after.

An assistant might be nice, but I’m a bit of a loner and I tend to work at a frantic pace that has a way of disturbing most bystanders. Whether it’s 4 AM, and I’m at some random truck stop along the New Jersey Turnpike working on ideas, or I’m in the darkroom printing, there is something selfishly haphazard and adventurous (but ultimately dangerous) about what I’m doing – something that you wouldn’t necessarily want to get someone else involved in.

Tasini – Could you explain to our readers such processes in some depth?

Massaia – Well, it all starts with the idea, and then figuring a way to present the idea in a graphically exciting way. Often, I will do small drawings almost like story boarding, and then I will simply go out and try to capture images that match the original conceived idea as closely as possible. I never set up scenes or create artificial environments. I simply keep persisting in a real environment until I get what I’m after. All of my images are one-shot scenes. I never composite multiple exposures or add anything to the original shot.

All of the original images are captured on slow black and white sheet film, using fairly long exposures. I use many different types of view cameras ranging from 4 x 5 up to 11 x 14 formats, and I can carry as much as 60 pounds worth of equipment on a single outing. After the image is captured, I develop the film using variations of PYRO, which is an old staining developer that allows me to severely overexpose my film without the highlights blocking up. I then start trying to determine the best way to create the final print. I work with many different dodging and burning methods, including pin registered masks, shadow templates, shadow mobiles, and whatever else I can conjure up. I do whatever it takes to match what’s in my head. After all the thousands of prints I’ve made, I still find it exciting finishing an uncompromised print and knowing that I’m the only person that was involved in its creation.

Tasini – Working alone at night is fundamental to your artistic process. How did the idea to work this way come about?

Massaia – I think because of the night’s intensity. In some odd and conflicting way, the volume is turned down at night, but everything else is turned up. 3 AM offers me a connection to the world that seems to elude me during more civilized hours.

Tasini – Your series Deep in a Dream: Central Park was shot between the hours of 2 and 6 AM, a time you describe as most “haunting, desolate, and inviting.” What about a haunted and desolate place makes it inviting for you?

Massaia – The late night/early morning hours offer a strange type of honesty, or perhaps longing, that simply evaporates once the sun rises. All the cards seem to be laid out on the table at 3 AM in a way that never really happens during the day. You have this constant feeling that at any moment something unforeseen and wonderful could happen, contrasted by a feeling that at any moment things could go very bad. Oddly enough, I also feel less isolated during these hours. I think that finding a connection in what most people perceive to be an undesirable time and place, is ultimately the catalyst for everything I do.

Tasini – You photographed the abandoned and severely damaged boardwalks of the Jersey Shore after Hurricane Sandy devastated the area. Being a native New Jerseyan, did that experience and those images strike a personal chord for you?

Massaia – Yes and no. When I started the “Afterlife” portfolio back in 2008, I came to realize that those series of images were my way of saying a final farewell to an area that had an unusually severe impact on me when I was younger. When Hurricane Sandy came and destroyed everything that I photographed, while the destruction was surreal, emotionally, I had already parted ways with the area in prior years.

Tasini – Your method as a photographer and the finished products that are your images are very unique, but have you ever looked to other artists for inspiration?

Massaia – I try to run from that concept. While I have great admiration for other artists, my goal is to follow what’s in my head, and if what I’m following in my head is considered trite, contemporary, dated, or “outsider,“ it must remain irrelevant to me, as long as I’m seeing my own ideas through, from beginning to end.

Massaia – I don’t know if I think like that. I think many artists goal is to teach the viewer something, or force a mindset/ideology onto the viewer. I’m simply chasing ideas that I have, and I certainly don’t expect people to feel what I feel, when I’ve conceived an idea. I suppose some people can view what I’m doing and can take from it a strong sense of loneliness/isolation, and others might find something inviting/connecting about it, and yet others might feel nothing at all. I don’t think any of those opinions are incorrect. 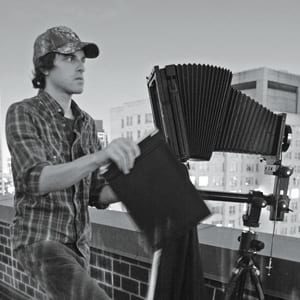 Michael Massaia was born in 1978 and grew up in New Jersey, remaining around the New York City metro area in throughout his life. His involvement in photography started in high school and he has remained consumed by a calling to create fine pictures ever since. He is self-taught and extremely well versed in the science of photography merging his astonishing technical talent with original and thoroughly planned compositional skills. He specializes in large format black and white film image captures and large format platinum and silver gelatin printing. Having researched and perfected negative exposure and processing including chemicals and even having built his own cameras, Massaia’s hand is in all that he does. He works alone and is the sole craftsman from the composing of the picture behind the ground glass to the moment the final print is made. Massaia’s photographs are true “one shot” scenes (his images are never composited from multiple exposures).

Having created various series of work such as “Deep in a Dream” that depicts Central Park during the nocturnal hours or solitary houses in New Jersey for “In the Final Throes: New Jersey,” the constant in Massaia’s work is a nocturnal atmosphere devoid of any human presence. Massaia has exhibited extensively throughout the United States showing his technical and compositional aptitude to a wide audience. His work has been featured in television documentaries, written about extensively in major photography magazines, and he has been a recipient in the 2013 Hearst 8 x 10 Photography Biennial. Today, Massaia continues to produce uniquely beautiful nocturnal compositions in brilliantly saturated blacks, whites, and grays.

Fine Art Photographs by Michael Massaia – Awaken From Your Dream