The books and papers which belonged to the early popes, who took up residence in Rome in the 4th century, were stored in a scrinium (a case or chest) and from the 8th century onwards were maintained by a librarian with this special responsibility. The eventful history of the papacy in the Middle Ages interrupted the continuous development of this first collection, however, and most of these holdings were subsequently scat­tered. Around 1450 Pope Nicholas V (1397-1455), as part of his project to rebuild the papal palace in the spirit of the Renaissance, established a new library, whose holdings were also to be made accessible to the scholarly public. By 1475 the Vatican library already occupied four rooms on the ground floor, which at the behest of Sixtus IV (1414-1484) were decorated by the most celebrated painters of the day. The same pope also appointed as librarian the erudite humanist Bartolomeo Platina (1421-1481; ill. p. 26), who wrote the Lives of the Popes on the basis of the Vatican manuscripts he catalogued.

The history of the Vatican Library as we know it today dates back to Sixtus V (1521-1590), who initiated the construction of a new building to house the collection, which by that time contained over 20,000 volumes. The site chosen was Bramante’s Cortile del Belvedere at the centre of the Vatican complex, which had served the Renaissance popes as an open-air space where tournaments and festivities could be held. This courtly tradition was radically terminated by the construction of the library build­ing, which not only ran right across the courtyard, but also symbolised a new moral authority at the heart of the Apostolic Palace. According to the plans drawn up by the architect Domenico Fontana (1543-1607), the Vatican’s printing press was also to be accommodated in the new building, wholly in the spirit of the Counter-Reformation. The library room on the top floor, named the Salone Sistino (Sistine Hall) after its founder, meas­ures an imposing 70 x 15 metres (230 x 49 feet) and became the yardstick for later libraries, including the Imperial Court Library in Vienna. With the ambitious fresco programme decorating its walls and twin vaulted ceilings, the Sistine Hall sits firmly within the tradition of centres of learn­ing and the libraries of secular princes. The most valuable manuscripts and books were housed in wooden cabinets along the walls; in contrast to the earlier organisation of the codices into a Latin and a Greek library, the holdings are today catalogued according to subject area. With the opening of a reading room for printed books in 1892, the library was opened up to a wider circle of readers. The Vatican Library is today run by a Prefect, under the titular direction of a Cardinal Librarian. – Massimo Listri’s The Worlds Most Beautiful Libraries, Taschen 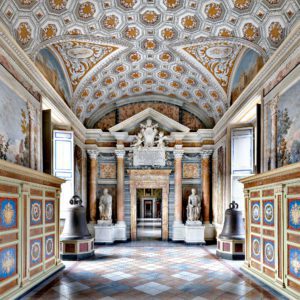