Books have been collected, written and preserved in the Benedictine monastery in Admont, in the Austrian province of Styria, for almost a millennium. The oldest holdings go back lo the time of Archbishop Gebhard of Salzburg (c.1010-1088), who founded the abbey in 1074 and endowed it with substantial landholdings and profitable shares, reallocated from an earlier foundation by Hemma of Gurk. Gebhard also donated books to Admont’s new monastic library, including two of its finest manuscripts: the three-volume Admont Giant Bible, also known as the Gebhard Bible, and a lavishly illuminated book of Gospels. These books – like Admont’s first monks – came from the archbishopric of St Peter’s in Salzburg, where a centre or manuscript production and illumination had been established in the 7th century. This tradition was taken up at Admont, whose scriptorium developed into a major centre of literary and scholarly activity that continued after its separation from St Peter’s. A criptorium also operated in the affiliated Benedictine nunnery, founded in I 120 and existing in parallel with the monastery until the Reformation. The library at Admont Abbey was first assigned its own room, the Armarium, around the middle of the 12th century, by which time it already comprised some 200 manuscripts – the majority of which are still housed there today. The names of the librarians in charge of the collection were recorded from the 12th century on, while inventories of the books have likewise come down to us from the 14th century onwards. Today Admont Abbey is home to some 1,400 precious manuscripts, of which more than half date from tho Middle Ages and the very earliest from the 8th century, plus more than 930 early printed works. For conservation reasons, these treasures are housed in their own climate-controlled environment separate from the main body of the library, which today contains around 200,000 printed books. With its centuries-old tradition, Admont Abbey may be seen as a historic monu­ment of book culture and it is therefore no surprise that its books should be housed in what is perhaps the grandest monastic library of them all. It was modelled on the Imperial Court Library in Vienna, from where its architect, Josef Hueber (1715-1787), also came, and aspired to a similar magnificence. The long interior is spanned by a ceiling made up of seven circular vaults and divided by a vertically accentuated central hall into three harmoniously proportioned spaces, within which the books are grouped clearly by subject, wholly in the spirit of the Enlightenment. in the central hall, beneath the ceiling fresco of Divine Wisdom by Bartolomeo Altomonte (1694-1783), the bookcases display numerous editions of the Bible and the writings of the Church Fathers. In the galler­ies on either side, the ceiling frescos portray the various areas of human knowledge, to which the subjects of the books below again correspond. The library’s decoration is further complemented by impressive sculp­tures by Josef Stammel (1695-1765), who worked for Admont Abbey for many years. The white and gold bookcases along the walls are filled with approximately 70,000 printed works. – Massimo Listri’s The Worlds Most Beautiful Libraries, Taschen 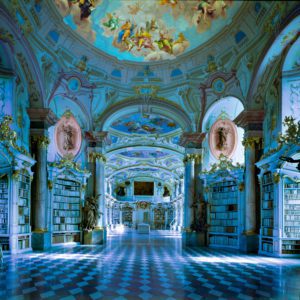