Signed and numbered 19/25 on label affixed on verso.

If there was a doyenne of fashion photography it would be Lillian Bassman.

She claimed that: “the nature of a woman [is] to be unconsciously graceful,” and “tried to record their natural grace with [her] camera.”

Born in 1917 of two free-thinking intellectuals in Brooklyn, NY, Bassman was brought up unconventionally free-spirited and independent. She met world renowned art director Alexey Brodovitch and began taking fashion illustration classes with him at the New School. Soon after, she became his apprentice and began working at Harper’s Bazaar in 1941. Four years later, Bassman was promoted to Art Director of Junior Bazaar; it was there she began to experiment with photography. Slowly becoming unenthused with composing magazine layouts, and with the support of Brodovitch, Bassman began her career as a fashion photographer in George Hoyningen-Huene’s studio.

Unlike her contemporaries, in an industry dominated by men, Lillian Bassman photographed women from different perspectives, and delicately captured the sensuality and elegance that only a woman can exude. With a painter’s sensibility her images are softly focused and strategically exposed from the negative to the final print. Her photographs exhibit a high contrast between light and dark and a grainy finish that are trademarks to her fashion imagery. She uses darkroom techniques such as burning and dodging, as well as pushing the film speed, to make graphic changes to the image. She employed a signature shallow depth of field that underscored the elegance of her images.

The photograph, “More Fashion Mileage Per Dress, Barbara Vaughn, Harper’s Bazaar, New York,” was composed in 1956. Tastefully dressed, wearing a hat, polka dot frock, and white gloves, Vaughn’s gaze out the window is accentuated by her profile. Bassman rarely took a photograph of a model looking directly into the camera, and her poses were categorized as unusual and innovative. Sometimes the model would be covering her face with a gesture or fabric, nonetheless creating a visually poetic image. By flattening her photographs, Bassman decreased the details in areas such as the windows and bus seats to make the model the main focus amongst the blurred silhouettes in the background.

Lillian Bassman developed a new aesthetic when it came to fashion photography, and her images are considered borderline abstract. She separated herself from the rest of the fashion photographers of her time, such as Richard Avedon and Irving Penn, by not conforming to their stylistic sharp focus imagery and by breaking rules in the darkroom. She never let the technical aspects of photography create a barrier or stifle her fierce imagination, once stating, “I was interested in developing a method of printing on my own, even before I took photographs. In there, I felt a sense of being able to say something I wanted to say, creating a new kind of vision aside from what the camera saw.”

Bassman successfully conveys a grace and mystery within her moody, expressionistic work. Her photographs are full of glamour and depict the fragility of a feminine mystique. 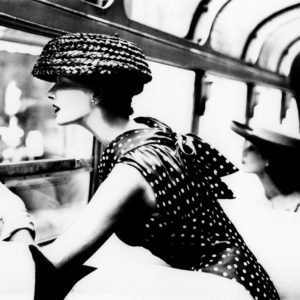