“The Teton Mountains in Wyoming have stature all year round, but on a cold, clear, winter morning looking west, I would contend they offer as impressive a backdrop for a filmmaker as any mountain range in the world. The key to their drama is their almost vertical rise from Snake River and the lake below.  There is nothing pedestrian or pastural about their ascendancy to the sky.

Julie Andrews would have struggled to sing and nanny seven children on these slopes, in fact there are not many slopes. The hills are more alive to the dangers of an avalanche than they are to the sound of music.

This image was, however, made by the staged foreground narrative paying homage to the tough life of trappers.  The dry lake offers a stage in winter, albeit an extremely cold stage. The morning we brought the horses onto the lake we were working in temperatures of around -26 degrees before sunrise.  That is cold not only for me but also the camera, the cowboy and possibly even the horses.

Riding on the frozen lake whilst leading another horse is only for a very skilled horseman and we had one in Randy Johnson – a veteran rodeo competitor and a rich character.

This is a favourite image of mine and I think the lens choice and the time of the shot was right. 10 minutes later and the sun slams the mountains – at which point the balance of the picture would be lost.” – David Yarrow 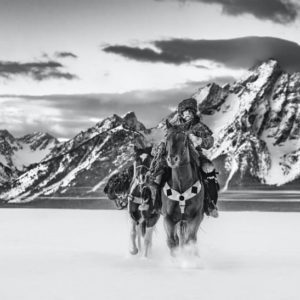