“This is special photograph for me and my cognitive processing has rarely played a bigger role in taking a picture. This period saloon scene in Durango, Colorado was a big ask and I don’t think I could have made this a couple of years ago. I sense that I have learnt from my mistakes and my work has improved in dimly lit rooms like this one. This is so much more of a challenge than photographing an elephant in Kenya and the stakes are much higher. With the talent involved, we had at least $100,000 of daily rates on site, I guess it’s a case of “go big or go home”.

It is a high risk game, but this kind of shoot excites me more these days.  There were so many moving parts and so many talented people not to let down. I was exhausted when I hit my bed, but I think we achieved what we set out to do – a character rich, wild west bar scene filling every inch of the frame. It is also not a scene in any bar, but the Diamond Belle saloon in Durango, Colorado.  Perhaps the most authentic and celebrated 1890 bar left in the Wild West.

The key was to compose the scene with the most menacing looking characters closest to the camera. I will always have the subject closest to the camera in focus and therefore the three leads at the table are core to the image. The balcony at the back, which is such a key feature of the Diamond Belle, adds another layer to the photograph and that was always the intent.” – David Yarrow 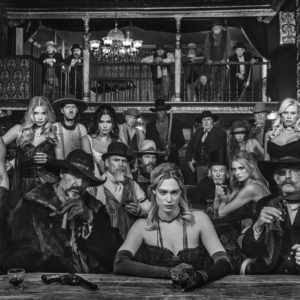