It is Only a Matter of Time

I have a paranoia of the mundane and maybe this picture exposes that trait.

The idea came to me as I walked back to my hotel from a charity dinner in Chicago in the autumn. I was a few glasses of red the wrong side of sober.

The city has the most visually intoxicating architecture in America and at the cross point of the river and Michigan Avenue, there is space to breathe and find a full frame, as opposed to a brutally vertical perspective. This distinguishes central Chicago from Manhattan. It is truly a stunning location, particularly at night. The incumbent US President chose his asset location well.

Taking my audacious and challenging preconception linearly through to its conception in the middle of a cold Chicago night involved a huge amount of team work and resolve and I thank everyone for their roles – especially the wolf and Chicago PD. (whose charitable foundation will rightly benefit from the proceeds of print sales).

I have closed down bars in my time, but never whole streets in a city centre. We started at 11pm and finished at 3 am.

I know there is a thin line between creative courage and insanity, but I like to push boundaries.

It is up to the viewer to determine my reason for the title. I could be referring to the clock in the famous neo gothic tower behind the Chicago Tribune building or indeed the onset of winter. But there is a less subliminal and rather topical message that is stamped emphatically all over the image. It is surely now “just a matter of time”. – David Yarrow

Art Inquiry: It is Only a Matter of Time, David Yarrow 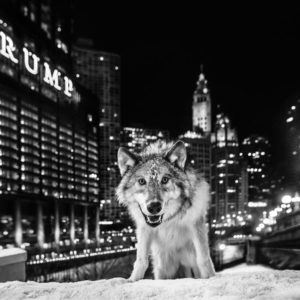