“We have all, at one time or another, entered a bar and immediately felt out of place. At the most extreme level this can evoke a sense of trespassing. This was very much the narrative behind this photograph.  To be greeted by an overtly territorial crew with menace and attitude.

But for the story to work, two things had to coalesce as one – the characters and the interior. I like playing with the cold, it adds a visceral layer to the story and in this case, it hints at an outpost on the final frontier. Surely the further off the beaten track we travel, the greater the chance of being the outsider.

This is a frame that exhausts every inch available in the camera and that was my intent. There were so many characters I wanted to include, but I was also reluctant to lose the mood of the frozen saloon. The icicles on the frosty bison with the snow laden television playing True Grit were key assets that needed to be seen to amplify the sense of cold.

Our key asset was, of course, Cindy Crawford and she had to have sovereignty of the joint. She can play a badass very well and that was her ascribed role.

It is not easy for everything to come together in such a tight setting as one tension spot can ruin the whole pastiche. It’s akin to camels and the eye of the needle. The wolf’s paw on this occasion came very close to Cindy’s shot glass, but we got away with it.

The wolf is actually a domestic dog breed called tamaskan – he is not 100% wolf, but that mattered little, as he merely added to the sense of trespass. The only reason to linger in this bar would appear to be the landlady. Maybe she could be won over?  Who knows, but she certainly owns the image.” – David Yarrow 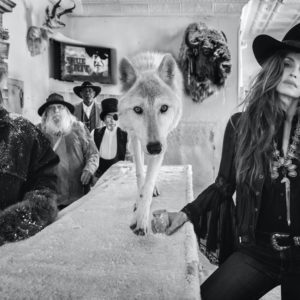