View cart “Garden of Eden, Amboseli, Kenya” has been added to your cart.
← PREV
NEXT →

There is no doubt that the lion is one of the most culturally significant animals for humankind and has been depicted throughout the world for millennia.

In Egypt the sphinx has the body of a lion, which was a sacred symbol of the goddess, who safeguarded the pharaohs in the afterlife. Stories and art throughout the Middle East show the lion representing great kings and as their companions. Chinese culture portrays the lion as a creature of great majesty safeguarding humans from ghosts and demons.

Although the lion is mostly represented as a noble, fearless and sometimes ferocious beast, we see depictions of a softer side too. In the story of Androcles and the Lion, Androcles removes a thorn from a lion’s paw, and in return the lion spares his life at the Circus Maximus in front of the Emperor.

There is only one lion that I know to perfectly depict this balance of ferocity and emotion. That lion is Vayetse. His name meaning; ‘and he left’ in Hebrew. Vayetse, now eight and a half years old, lost his brother to a snake bite when he was just over one. He mourned for weeks until we had to intervene and found some lionesses for him to live with. Throughout his life, he has been the perfect balance between being authoritative enough to be respected, but gentle enough to be loved and adored.

There is only one photographer I know who could capture this balance, his name, David Yarrow. David’s images serve as great conversation pieces throughout the world. If you don’t believe that these pictures speak, I challenge you to go and view one up close. But even for this talented Scotsman from Glasgow, this was a big ask.

We discussed what we were trying to achieve and how on earth we were going to achieve it. Ultimately it was decided that an explosive running shot would be best. It would be shot at a low angle with nothing else in the frame to distract our eye. The lion would need to be running at camera and although David is a genius with his remote control work, he decided to operate the camera himself, which naturally added to the complexity of achieving this shot. It took a good two days to come up with this image. I’ve seen almost every picture there is of a lion running but I don’t think there is a picture of this calibre out there.

This photograph immortalizes Vayetse and it symbolizes what a lion is about. The essence of his being is captured by this one frame. One millisecond too early, or too late, and this shot would not have worked. An image of explosive power and focus is extremely difficult to achieve but we weren’t trying to get a nice safe picture of a lion. We were aiming for gold and that’s what we got. 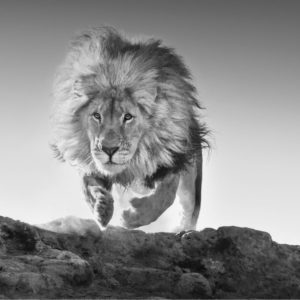