Signed, titled, dated, and AP on certificate of authenticity.

Over the last few years I have taken some pictures of wildlife that grab the eye because of their composition, aesthetics and content. I have tried to explore new angles and new methodology to garner fresh content in a content-spoilt world. There have been many proud moments.

But I have never sought to be pigeonholed as a wildlife photographer – after all, I started my career at the World Cup Finals in Mexico in 1986. Maradona was and is an extraordinary man, and we can perhaps empathise with his ups and downs because we are human too.

Human documentation can have an uncomfortable proximity, simply because we understand more about the subject than we could ever do with animal wildlife. I have long wanted to travel to the cradle of mankind and immerse myself in a daily life that – whilst alien to us – is still human life.

In my view, the rawest place left on earth is South Sudan, which is still recovering from a shocking civil war. My friend Levison Wood – an ex-Para and veteran of Afghanistan – has just walked the length of the Nile, a feat documented in a widely acclaimed series on Channel 4. Knowing my desire to push boundaries, he encouraged me also to go the extra mile and travel north to the deeply tribal South Sudan.

The logistics and regulatory red tape involved in traveling 200 miles north of Juba (the capital) on water ravaged roads, to photograph a previously unfilmed Dinka cattle camp were formidable, but equally I knew that these hurdles precluded most sane people from entertaining the idea, and that I therefore had a chance of capturing something special and fresh.

I had a preconception of the image that I wanted to return home with – something that conveyed the raw enormity of a Dinka cattle camp in an elemental and biblical setting. Something timeless and vast. Like a Rembrandt, I wanted people to be able to look at the picture for hours and find new stories each time. I was indeed the first photographer to visit this 25,000 strong cattle camp, which was close to the heart of the civil war last year, and I felt a responsibility to get it right.

The Dinka was fascinated by my skin and my hair – indeed many of the children had never seen a white man. They did not care about my cameras – cows are their passion and on Lev’s advice, I brought A4 pictures of Highland Cows from Scotland as well as local cow medicine. I won the crowd, as they were transfixed by the Highland Cow images and equally grateful for the medicine. You reap what you sow with tribes.

On that glorious evening – 28th December 2014 – I did a good job, and the two days on a shocking road, followed by hours of walking in 42-degree heat and then wading through four feet of water known to house the odd Nile crocodile, were worth it. No other filmmaker has managed to get to this location. After an unnerving chest-deep re-crossing of the river at dusk, the rest of the long journey home seemed to go quickly. I knew what I had on my memory card, and I was elated and excited. I could not wait to show people. Two days later the Daily Telegraph – without precedent – gave it two pages.

In retrospect, I did one clever thing – I brought a ladder, because I wanted to silhouette any key detail against the smoke, which the Dinka create to fend off mosquitos, rather than against the setting sun. After all, we have all seen a setting sun and the clichés it can offer, whilst most have never seen this degree of controlled smoke. The smoke gives a sense of place and an ethereal countenance. Mankind is heavenly on one glance and Dante’s Hell on the other.

It was a long way to take a ladder – perhaps further than anyone has ever taken a ladder in Sudan. The Dinka looked at it as if it were a freak of engineering. What a good decision that ladder turned out to be. I will never reveal this exact destination to anyone, why would I? – David Yarrow 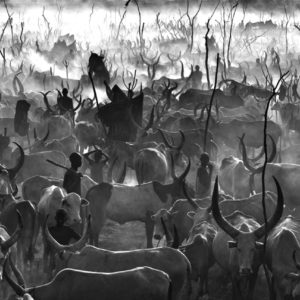