Cathleen Naundorf created Haute couture photographs in dream-like settings with an elegant and Old World aesthetic. Firstly, documentary representation is less important than an overall atmospheric, pictorial effect. The stunning and unique haute couture designs in the artist’s work are a result of her being privileged with an almost unlimited access to the archives of such haute couture houses as Chanel, Dior, Valentino, Lacroix, Armani, Saab, and Gaultier.

Using an analog, large-format camera by Deardorff or Plaubel complete with Polaroid film, she has found a photographic process. This process is distinctly painterly and captures the unpredictable beauty of the fashion designs that captivates her. Naundorf developed a technique of Polaroid transfer that results in picture surfaces with a quality including various distinct markings and irregular abraded patches of color. Accordingly, the uniqueness of Polaroid photographs lends itself to the exclusivity of haute couture designs. To produce the unique images, she meticulously researches and selects elegant and often mysterious locations creating near cinematic mise-en-scènes which suggest a past life belonging to a “grand age” of style and design.

For the series “Le fille en plâtre” of John Galliano’s Dior winter 2007 haute couture, Naundorf describes her process and the care she took in selecting the setting: “People often ask me what first inspires me when I get an idea for a shoot…In this case, I had everything: the amazing looks, the models, the idea, and the type of location I wanted which was a kind of all powder white and completely unique place, but we could not find it. Finally after three years we discovered the last ‘stucrateur’ [plasterer] in Paris. It was an atelier du style! I was overwhelmed by the location. Big plaster statues standing around, pieces of antique flowers, casting bowls, old panels, and white dust; my powder everywhere! When I arrived the day of the shoot I saw big trucks from the House of Dior because some dresses were so large that they needed whole cars. It was quite fun. La fille en plâtre, The Girl in Plaster, had finally found her place.”

Naundorf brings a unique and steady intelligence to the world of haute couture photography. Naundorf work appears in periodicals like Harper’s Bazaar and Vogue. Moreover, Naundorf’s had numerous international exhibitions and she has worked privately with celebrated designer Valentino Garavani. Today, Naundorf continues to photograph haute couture and place her faith in the dramatic power of beauty and elegance. 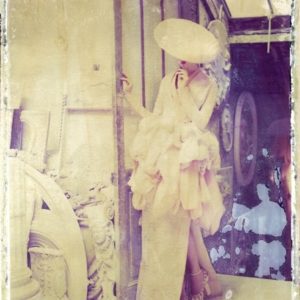