Fascinated with the transformational power of photography and its ability to create profound images, internationally acclaimed photographer Michael Eastman captures living spaces, crumbling surfaces, horses, and the landscape in the act of remembrance and as a testament to the power of seeing.

Under a clothesline of colorful garments, two chairs sit empty next to each other within the confines of a worn-down Neoclassical home. Dilapidated walls, which were once adorned with elaborate architectural details, frame an antique green commode under a partitioned mirror, reflecting the interior of a neglected estate. The intricate architecture of grand stairways clinging to their forlorn mid-century glory or the pin-drop silence and stillness of an ancient library’s interior are part of the vivid scenes within a Michael Eastman photograph. In each creation, Eastman provides an abundance of unique detail, inserting an element of imagined history. His work is a study in deep observations. The moments Eastman captures are part of a larger story, one that in its entirety we can never really know. His photographs speak to a narrative beyond the frame. This narrative concerns history and time as a metaphor for a human presence.

Eastman’s body of work, along with his saturated use of color, ranges between creative vision and nostalgia. Eastman’s photographs suggest a meeting ground for imagination and reality, where the path between history and the present becomes a poetic visual record. Whether capturing a concealed doorway in a Buenos Aires palace, creating unique cyanotype prints from foliage, or presenting the many empty chairs, facades, doorways, mirrors, and interiors as the protagonists of his photos, Michael Eastman’s photographs are captivating.

“The places I photograph,” Eastman says, “are not that far gone. There’s a table there somebody uses. It was beautiful once, and there’s a history there. It’s like a portrait of a very old woman or man, still beautiful and dignified.” The comparison to an elderly person is apt: down at the heels, perhaps, but still upright, still handsome, still suggesting at a glance that youth was beautiful, life has been full, and it’s not over yet, no matter how one has suffered.” – Vicki Goldberg, The Vanishing Point

Michael Eastman was born in 1947 in St. Louis, Missouri. In his early years, he attended the University of Wisconsin. At 25, Michael Eastman began looking at renowned French photographer Eugène Atget and the iconic American Walker Evans. The newly inspired artist was mesmerized by the idea of traveling in time through photography. To see images of early 20th century Paris or the American South in the 1930s was a dream made possible through the work of these historic artists. This introduction to photography helped Eastman pursue a career in the medium. He worked diligently and is primarily a self-taught artist. He considered Atget, Evans, and the Americans Edward Weston and Ansel Adams primary influences for his artistic practice. During this time of intense creative curiosity, Eastman began working with Ansel Adam’s photographic technique, leading to a once-in-a-lifetime experience. 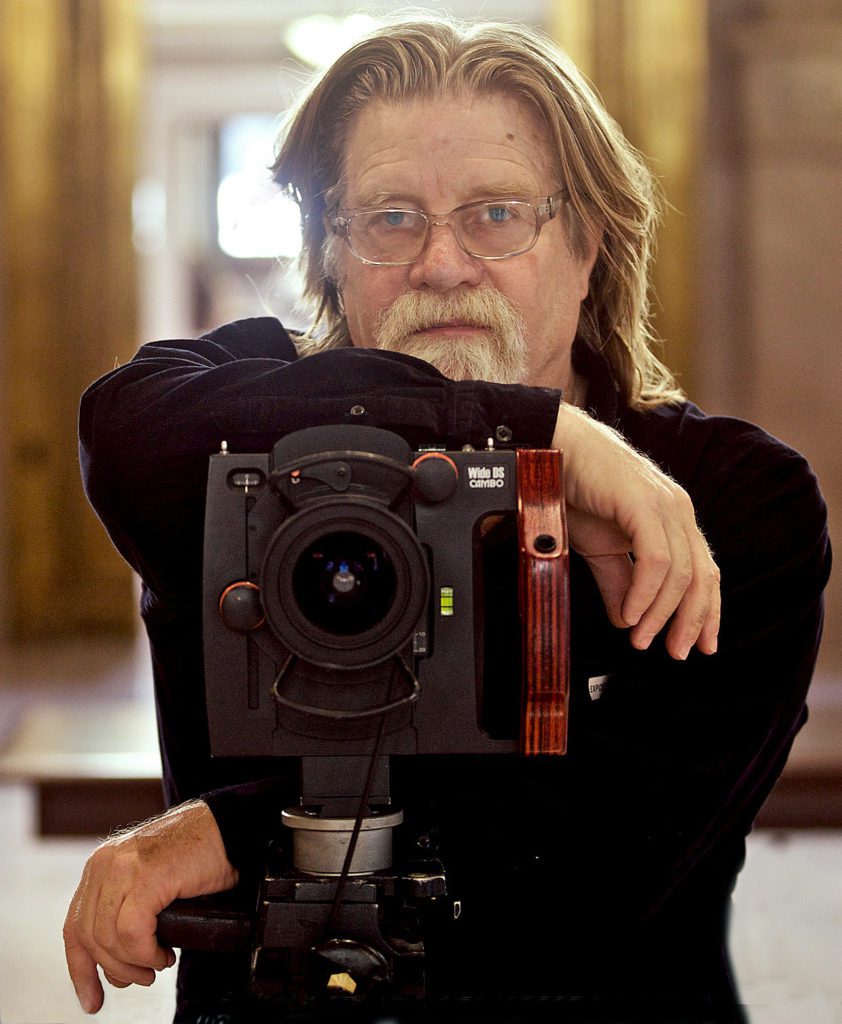 “I was using Ansel Adams’ zone system but was troubled with mottling and uneven development. So, I called 411 in California—remember this was 1973—and asked for Ansel Adams’ phone number. I got it, called him, and he answered. Really! He was happy to help. Can you imagine someone doing something like that today?” – Michael Eastman.

Eastman once said that photographers, regardless of their intent, are ultimately historians. Eventually, Michael Eastman’s explorations into the field of photography made him a seeker and explorer. For the past five decades, he has captured landscapes, architecture, horses, and abstraction.

In one series, an interior room with empty chairs references the glory of Havana’s faded elite. In another, the striking, hand-painted lettering used in the facades of mid-century shops and businesses from his Vanishing America series recalls the early significance of America’s abandoned main street. Just as a novelist uses descriptive language to set the stage for a story, Michael Eastman finds an equivalent visual experience. Every form, shape, and color can provide inspiration. The viewer engages in Eastman’s photograph’s rich treatment of architectural surface and space, questioning the significance of what is in front of them.

“Take Henri Cartier-Bresson, for example. He was famous for capturing the moment, but he was also a master at moving the camera—framing his shot—in a split second to get that scene. Ansel Adams famously said he could move entire mountain ranges miles simply by moving his camera a few inches.” – Michael Eastman.

Michael Eastman considers his photographs of architectural interiors as portraits that showcase the result of time and use but that still present all of the physical imperfections and personal impressions caused by their unique histories. In this body of work, Eastman’s photography offers a painterly use of color, a sense of quiet admiration, and sincerity. These private stages of human interaction echo the untold stories still reverberating within their walls.

For the photographer, rooms or spaces need to have developed a unique patina produced through time. Interior spaces must be “lived in” and convey a feeling that someone has just left or is about to enter a room. He is always interested in the human dimension of a room – without a person being present. The economic splendor projected within a space holds little interest for Eastman – the breadth of human experience is key. He is careful to leave spaces precisely as he sees them. His fascination concerns the forensics of textures, colors, and degradation of a building that happens over time.

“Part of the greatness of photographs is what they are and what period they catch. When you’re in the present it’s very difficult to see what’s significant, what’s going to be important, what people are going to want to look at in twenty or thirty years.” – Michael Eastman.

In “Isabella’s Two Chairs with Laundry, 2000” and “Isabella’s Mirror, 1999,” Michael Eastman engages in a visual relationship with private space. Here, the photographer creates a portrait of a home, revisiting the same residence years later. The images began in 1999, and the titles reveal the importance Isabella, the property owner, has as the main protagonist. The pictures profile her domestic world, recording and dissecting the physical extensions of her life. Both photographs present a private space with a perplexing dichotomy.

“Isabella’s Two Chairs, 1999, was one of the first interiors I made in Cuba of this woman named Isabella, very strong photograph…When I went back, I went right back to the same place to look at and to see Isabella’s. Isabella had died a month after I was there, she was not well, and her niece took over the house and there was an energy in there, there hadn’t been before. I noticed that the chandelier even, there were more crystals on it than before and when you look really close at the chandelier you’ll see that those additional crystals were put on by Isabella’s niece using the ties from grocery bags and stuff… Then, I went back in 2010, and it had been renovated. It was owned by the state of Cuba. All the charm and warmth, patina was gone.” – Michael Eastman.

In Eastman’s images, there is a multi-dimensional understanding of what you are viewing. In spite of significant signs of deterioration, there is a luxurious structure in which the architectural style, furniture, and chandelier show a regal but aging place in disrepair. The images also suggest a current presence. Personal items of clothing drying from hangers, a blurry reflection from a mirror reveals stacks of books and an opposite view of the room. The photographs capture a vitality within this dilapidation that relays an enigmatic presence. Perhaps someone had just exited the room and was about to enter. The longer the viewer focuses on the image, the more mysterious and compelling the spaces become. His pictures can be viewed as invitations to go into a larger dimension, to look deeper and see more.

The photographs of Isabella’s house exist in a moment between the generations. The mirrored furniture references perspective and time while helping the viewers orient themselves within the space. The reflection in the mirror connects both pictures and skews the notion of time. The large, ornate chandelier is present in the mirror’s reflection. The mirror can also be interpreted as alluding to art history. As a symbol of wisdom and self-knowledge or vanity’s implication, the excessive admiration of self. The mirror has led to another dimension. The absence of movement in Eastman’s images encourages the viewer to pause and wonder at the potential for a photograph’s endless stories.

For his most recent series, Eastman moves away from the close reading of interior spaces and explores an alternative photographic process, the cyanotype. The cyanotype became a popular 19th-century form of photography that “fixed” an image onto a sheet of paper sensitized with iron salts. Still, within the family of the built environment, the cyanotype was favored in the fields of construction and architecture throughout history, a fond subject matter for Eastman.

“The cyanotype process is much cruder and immediate than other forms of photography. Early fine-art photography taught us the beauty and coolness of a dramatically rendered black and white photographic print. The blacks were so deep, rich, and lush, and the black and white transformed a color scene into a completely other world. I have always strived for an impactful and transformative print. With the alternative photographic process, the emulsion is applied by hand. This application is very much a part of the process. The artist’s hand and intent are very visible and very important. Being able to see the marks made by the brush add to the impact, power, and handmade nature of this printing process.” – Michael Eastman.

As well as his interest in traditional darkroom and digital photographs, Eastman has always been a printmaker. He has used the cyanotype process to rekindle his interest in printmaking and explore the natural landscape, both real and imagined. Eastman focuses his expertise as a craftsman when he observes details in his images arising from architectural facades. Eastman highlights the rich hues of blue and white, the raw, tactile nature of the work on paper, and the expressionist details created by his hand gestures while preparing the cyanotype print. In these cyanotypes, the photographer captures a unique painterly quality different from previous work. And while the various previous series explored human-made structures, these explorations became homages to nature.

“There’s a whole range of feelings when I’m engaged in the process of making art. Certainly, excitement is one of them. When you come up with an idea, you can’t wait to get up and start working. There’s nothing better.”

The capacity of photography to show things as they are without revealing how they arrived at their present state helps Eastman create poetic images that find beauty in use, continuity, and degradation. Photography has historically, because of its mechanic basis, been an instrument to capture the “truth.” It has often dealt with picturing a reality. A photographic image stops time and presents an accurate record of what a specific phenomenon looked like when the exposure was made. Michael Eastman has recorded for posterity vanishing facades and edifices. His aesthetic is highly developed, and he has always found a way of looking for beauty and “truth” simultaneously. How he deals with notions of time, history, and experience are paramount and the continuous thread in Eastman’s work.

Simple Pleasures: Photographs that Make You Jump for Joy