In “Isabella’s Mirror, Havana,” Michael Eastman engages in a visual relationship with private space. Here, the photographer creates a portrait of a home, revisiting the same residence years later. The title reveals the importance Isabella, the owner of the property, has as the main protagonist; the picture is profiling her inner world, recording and dissecting the physical extensions of her life. The photograph presents a private space with a perplexing dichotomy.

The photographs of Isabella’s house live in a moment between the generations. The mirrored furniture references perspective and time while helping the viewers orient themselves within the space. The reflection in the mirror connects both pictures and skews the notion of time; the large, ornate chandelier is present in the mirror’s reflection. The mirror can also be interpreted as alluding to art history, as a symbol of wisdom and self-knowledge or as the implication of vanity, the excessive admiration of self. Perhaps the mirror creates a narrative for Isabella’s house, touting a delicate balance between self-regard and honesty. 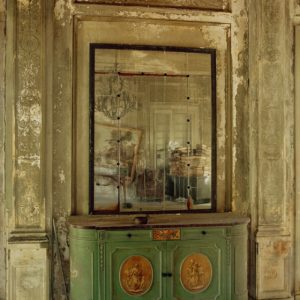