Will McBride, born in 1931 in St. Louis, is an American photographer best known for his black and white images of the youth culture in postwar Germany. Although at times controversial due to its frank and explicit nature, the work of McBride offers a personal documentary approach that has had a remarkable influence on the works of later photographers such as Nan Goldin and Wolfgang Tillmans.

From Vermont to Germany

McBride’s involvement with photography came later in his life. He began his education at the University of Vermont, where he studied painting privately with Norman Rockwell. He later transferred to the School of the Arts Chicago, but ultimately completed his studies at Syracuse University in 1953. His initial introduction to Berlin was during the mid-50s when he was sent to Germany while serving in the army. After being discharged from the army, McBride decided to settle in Berlin. At that moment, the city was in the process of reconstruction and rediscovery after the war. McBride immediately became fascinated with documenting the rapid rebuilding of West Germany, as well as its effect on youth culture. The emerging sense of optimism and hope within a city of ruins became a recurring theme within McBride’s work, and started a life long photographic love affair with Berlin.

Will McBride’s passion and adventurous spirit took no time to get noticed and Willy Fleckhaus (considered Germany’s first art director) made McBride Head of Photography for the highly acclaimed youth magazine, Twen. He began documenting the sexual revolution, and the breaking down of barriers within a divided city, with the touch of tenderness of adolescence. The youth culture, at the time, was shaking off the terrors and the effects of war, and was learning to once again fall in love with life, with sex and with each other. His images introduced a fresh perspective, one that has been often controversial for the viewers. Even though the idea of a sexual revolution was popular throughout Europe in the 1960s, McBride’s photography still had the ability to stun the viewer with its directness. Although at times explicit in content, McBride’s photographs always convey a sense of charisma and charm, one that is full of wonder and astonishment with postwar Germany and its thriving youth culture.

During his tenure at Twen, Will McBride often took trips to the unknown, broke taboos, to found exciting and authentic subjects. He was not only one of the earliest photographers to redefine the thin line between professional life and photojournalism, but he also practiced an impressive close-up perspective. The closeness McBride established with his subjects created an overall feeling that the photographer belonged, that he was an insider, pulling the viewer deeper into the images. 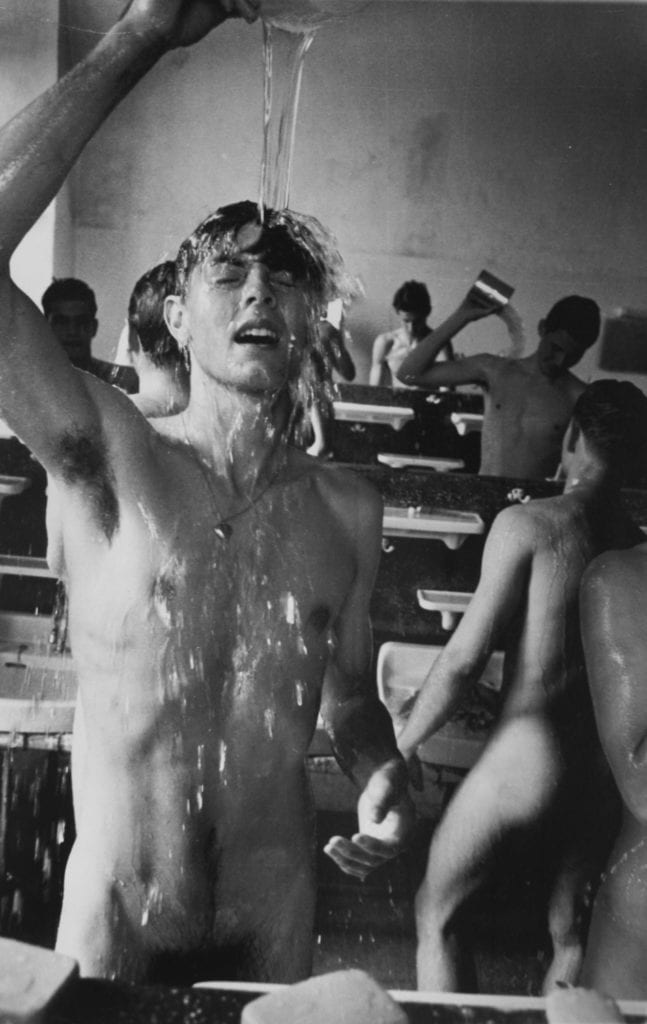 Mike in the Shower

One of the photographs that best represents McBride’s intimate aesthetic is one that is also considered one of his most iconic. Mike in the Shower belongs to a series of photographs from the series titled Salem Suite. The series, originally commissioned by Twen in 1963, featured McBride following Mike, a student in Salem Castle School located in Beden – Württemberg, and documenting him and his peers in their natural habitats. McBride followed Mike through classes, athletic practices and meals in what was considered to be one of the most elite schools in Europe. The black and white photograph shows Mike, McBride’s main subject, taking a shower with fellow students in the communal showers. The overall idea of the series was to document aspects of student life. McBride completely breaks down the barrier between subject and artist, particularly in this image. The subject is seen unaware that a camera is present. McBride also makes a tender reference to the sensuality that is a common theme in his photographs. The photograph collides innocence and curiosity, showing snapshots of boyhood in motion.

An Undeniable Influence on Contemporary Photography

Although the images of Will McBride caused a stir (and at times outrage) during the 50s and 60s, his influence in contemporary photography is undeniable. He has become a main point of influence for artists who explore themes of coming of age, youth, as well as ideas such as population explosion and who have adopted an overall personal documentary approach within the medium. The intimacy, authenticity, and closeness felt in his photographs is one that proves to be one of the biggest challenges for photographers today. The beautiful, delicate work of Will McBride served as a representation of the culture, arts and politics of the postwar period in Germany and beyond. His work remains in the collections of the J.Paul Getty Museum and the Philadelphia Museum of Art. Will McBride was awarded the Dr. Erich Salomon Prize in 2004, making him join the ranks of photographers such as Robert Lebeck and Sebastião Salgado and Barbara Klemm. He passed away in Berlin, in 2015, at the age of 84.

Suspended in Time with Christopher Broadbent