Merging the Worlds of Fashion and Fantasy

There is a well-used adage that says there are reasons for everything. This is certainly true for why Ormond Gigli’s photograph, “The Girls in the Windows” is one of the most beloved pictures in photographic history. It achieves what a great fashion photograph has the potential to do. It effortlessly and gracefully merges the worlds of fashion and fantasy to create a photograph that transcends time and captures the imagination of collectors with its freshness, spontaneity, and uniqueness.

Ormond Gigli was a young photographer back in 1960. He had a sparse studio in New York City on East 68th St. and would often gaze out his window to see an old dilapidated Beaux Arts building – abandoned and empty. The image became engrained in his mind and he would imagine, in his dreams. “What if there were beautiful Women in all of the Windows?” This recurrent dream prompted Gigli to try to bring this vision to life. 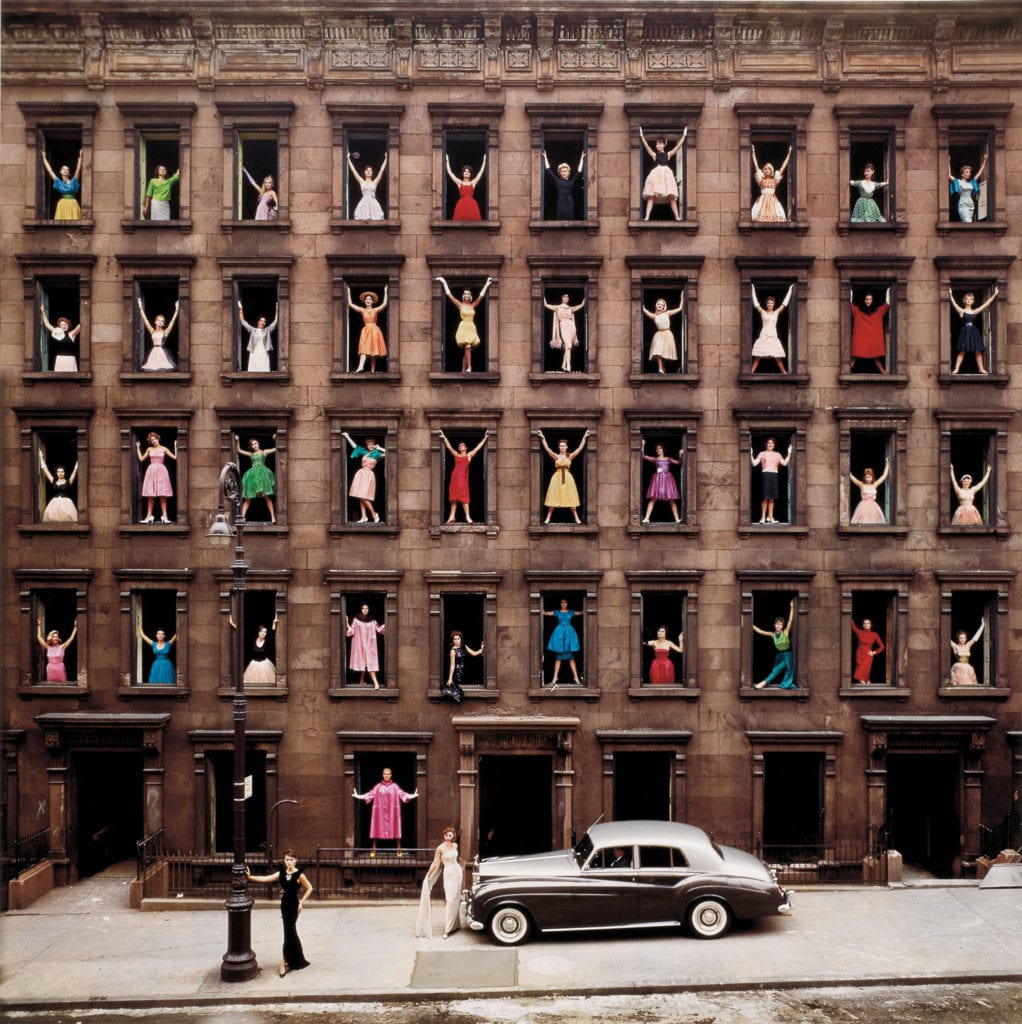 The Making of the Image

He received a notice that the building was due to be demolished. He hadn’t the money to pay for professional models – or an access to a budget for a picture that had no sponsorship. So, he contacted the foreman of the building and convinced him to clear a 2 hour period of time for him to work – and clear out the window jams. He reached out to a modeling agency that he had worked for, and asked for models to volunteer to be in his ‘dream’ picture. They were to wear what they wanted and show up over the lunch hour.

Since the building had been gutted of electricity and gas – there was a gaping hole on the sidewalk. So, unafraid to ask a favor, he contacted the city and asked for permission for the Rolls Royce to be parked on the sidewalk for the time necessary to set up the picture. He then placed the models, including his wife, trying to loosely coordinate their outfits into the 30 windows. Some were bold enough to stand on the window jam (pre OSHA – of course) and some were framed by window. With three additional models – 2 on the street and one on the ground floor the picture was complete.

Ormond is cantilevered out on the fire escape of his studio – shooting with a wide angled lens. Here was a chance to realize his dream. In his desire of breathe to life and energy into a building that would soon be gone, he created a picture that 60 years later is as vibrant and original as it was when it appeared behind the ground glass of his camera lens. 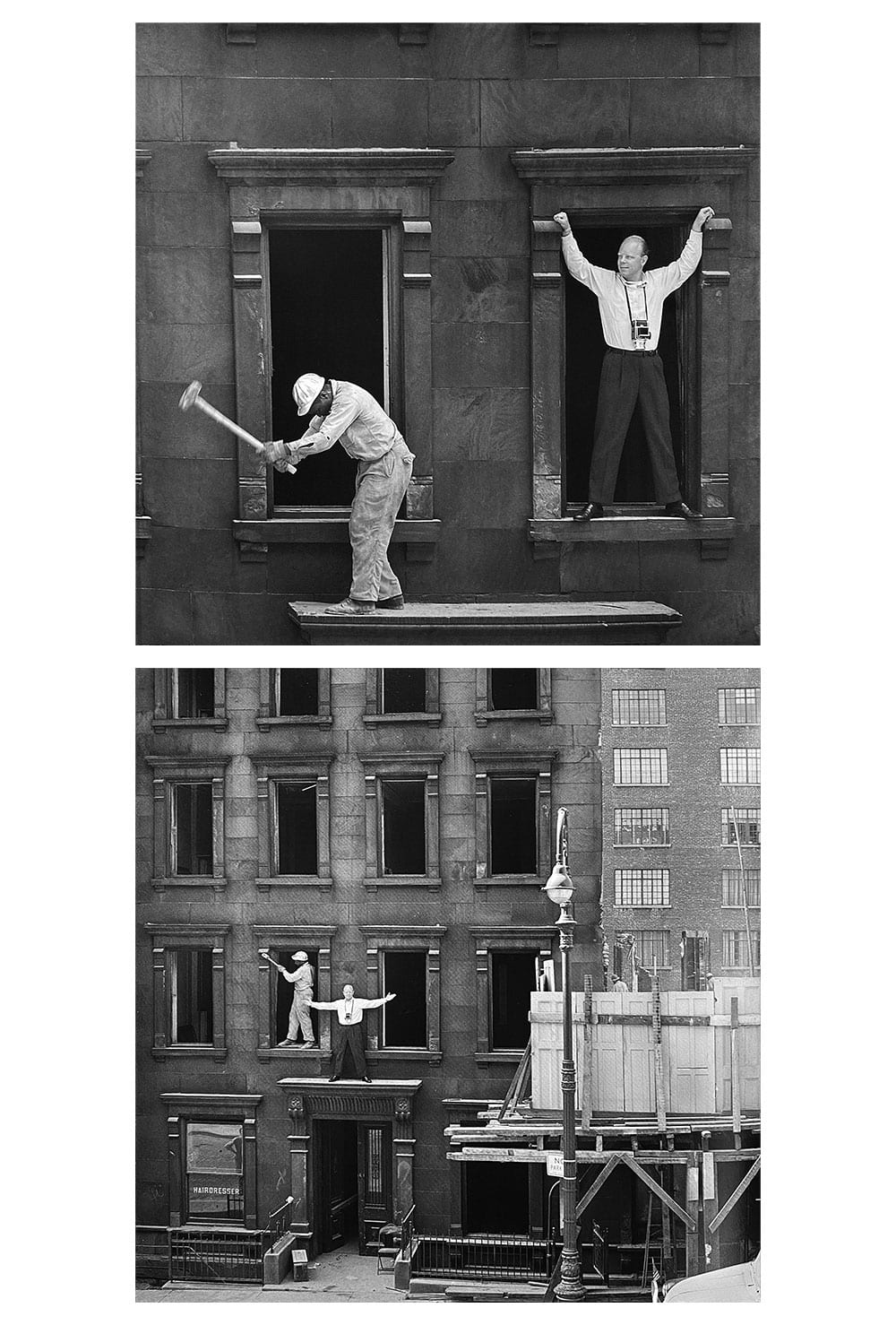 “Girls in the Windows” Over the Years

We have had the opportunity of exhibiting this photograph in its different sizes over many years – and ask ourselves why it continues to amaze and delight collectors. We could talk about the repetition of forms, its tight structure, its compression of space, seductive use of color and beautiful women gazing out at the camera as reasons that it is a rigorous, well constructed image. Yet, the power and popularity of “The Girls In The Windows” can’t be so easily explained.

In an age where everyone is making and taking photographs we remember less and less of what we see. Ormond Gigli had a rich career and went on to produce great fashion based photograph, celebrity work, product campaigns, motion picture promotional images, and had his pictures generously reproduced in many of the leading magazines over 30 years. However, “The Girls in The Windows” has done what the infinitesimally small percentage of pictures have achieved- it is an icon. It is a picture who’s artistry, impact, and brightness has transcended time. Just as Ormond must have felt this great connection to the models and location and his dream – we connect to the spirit, freedom and joy of the picture. Even though Ormond is no longer with us – “The Girls in the Windows” will always have a life of its own.

Simple Pleasures: Adventures are to be Seen – All Aboard!

Looking Back: Those Who We Will Miss