“It’s the primal glory of such a land, shared by so many different creatures, that has a visceral impact on most humans that see this. That has the ability to fill the most jaded of us with a profound sense of wonder. But the destruction of these animals, of these African places, is not happening in the past where we grew up, but in our own immediate present.”

In this video directed, written, and narrated by Nick Brandt, the viewer learns about the production of Brandt’s fascinating series, Inherit the Dust. For this work, the photographer records the impact of man in places where animals used to roam. In a succession of panoramas, Brandt erects life-size panels of previously taken, but unreleased, animal portrait photographs. The combination of life-size animal portraits with encroaching urban landscapes depict the harsh realities of an environment that is no longer habitable by its original dwellers. 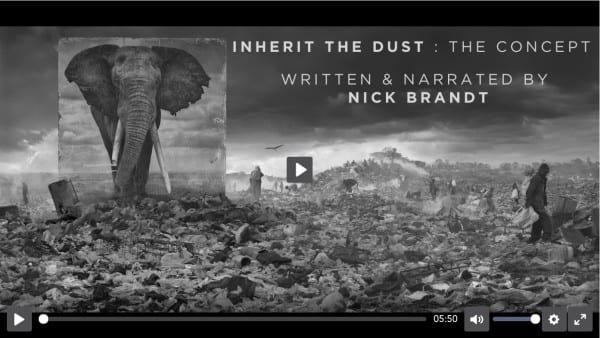 A Photographer With a Mission

Nick Brandt is an English photographer whose themes have centered on the imminent peril and disappearance of nature in Africa. For the past two decades, Brandt has been ahead of the curve. He has created a body of work that underlines the critical need for conservation efforts.

In his trilogy, On This Earth, A Shadow Falls, and Across the Ravaged Land (2001-2012), he established a style of portrait photography of animals in the wild. Secondly, this work is similar to that of the portraits of humans in studio settings. These pictures were shot on medium-format film, attempting to portray animals as sentient creatures not so different from us. This body of work presented Nick Brandt’s awe of the wonders of Africa and its rapid disappearance.

In his series, Inherit the Dust, Brandt places portraits of animals, printed life-size and glued to large panels in Kenya, in areas indigenous to those animals. In this series, the intrinsic allure of the natural fauna is juxtaposed against stark, gloomy environments comprised of quarries, underpasses, and dumpsites. As a result, these images demarcate the boundaries of so-called “progress”. They ask the question, is human development yielding the best results for the world? Or is it devastating the environment of the wildlife that thrived in those locations and destroying the habitat’s delicate balance?

“Nick Brandt’s ravishing portraits of African animals are like premonitory memorials, taken to aid the cause of staving off extinction. In Inherit the Dust, his astonishing panoramas of those portraits – installed as life-size panels in industrial and urban wastelands that have trampled the animals’ habitats – are a jolting combination of beauty, decay, and admonishment. The result is an eloquent and complex “J’accuse,” for the people are as victimized by “development” as the animals are. The breadth, detail, and incongruity of Brandt’s panoramas suggest a collision between Bruegel and an apocalypse in waiting.” — Vicki Goldberg, Art Critic, Author

A Plea to His Audience

Ultimately, Nick Brandt’s photographs examine the consequences of human development in a literal as well as poetic manner. They underscore the need to protect both wildlife and the environment. Brandt creates a profoundly moving body of work that reminds the viewer that human life will be sorely diminished by the transformation of a landscape that fails to align our needs with those of the broader ecosystem.

Brandt’s most recent series is This Empty World, 2019. About this work, the photographer writes:

“This Empty World addresses the escalating destruction of the natural world at the hands of humankind, showing a world where overwhelmed by runaway development, there is no longer space for the animals to survive. The people in the photos are also often helplessly swept along by the relentless tide of “progress.”

“The astonishing images in “This Empty World” deliver the emotional shock rarely felt, but urgently needed, to accelerate global conservation.”

Brandt has had a large number of solo gallery and museum shows worldwide. These showings include New York, London, Berlin, Stockholm, Paris, and Los Angeles. Born and raised in England, he now lives in the southern Californian mountains. He is co-founder of Big Life Foundation. This foundation fights to protect the animals and ecosystem of a large area of Kenya and Tanzania.

Simple Pleasures: Photographs That Connect Us in Friendship

Simple Pleasures: All Dressed Up and No Place to Go...