“I would say that essentially photography is my hobby. At the same time, my profession and it’s a good thing that they use the same materials. It makes it quite convenient.”

Among celebrated photographers, no other became as well known for their sense of humor as Elliott Erwitt.

Often bringing about smiles and sometimes outright laughter in viewers, Erwitt’s images create delightful moments through the use of visual wit. Erwitt’s puns usually join together seemingly disparate elements to make spontaneous flashes of comedy. Creating an informal style that is uniquely his own, Erwitt became an uncanny observer of others.

At Home with Elliott Erwitt

In the following video, At home with Elliott Erwitt, available on Vimeo, we learn some history behind Elliott Erwitt’s influential career. Filmed in New York, Elliott Erwitt discusses joining the Magnum photography agency and meeting Edward Steichen, Robert Capa, and Roy Stryker. While the footage presents Erwitt’s most famous pictures and interior views of his studio, the photographer speaks on the trajectory of his career. Erwitt recalls beginning his career with Magnum and of the positive impact of keeping the copyright to his work. On how viewers find his work funny. Additionally, he speaks of working on a book a year and the pleasure of seeing his published prints. 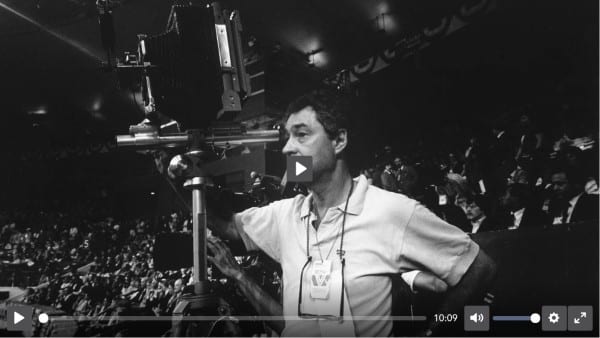 Erwitt was born in Paris in 1928 and spent his childhood in Milan before moving to the United States in 1939. The son of Jewish immigrants, Erwitt, lived in NYC for two years before attending high school and college in Los Angeles. While in Los Angeles, he was first exposed to photography in a commercial photography studio. Then he went on to study filmmaking and photography at Los Angeles City College. In 1949, he returned to Europe to pursue artistic photography, where he traveled around France and Italy. In 1951, Erwitt was drafted in the U.S. Army and again took the opportunity to photograph Europe, specifically France and Germany.

Erwitt eventually returned to New York, where he was to settle and met Robert Capa, Edward Steichen, and Roy Stryker, who would become guiding mentors for Erwitt. Stryker was the director of the Farm Security Association’s photography department, and he hired Erwitt to work on a photography project for Standard Oil. Erwitt would then start a freelance photography career working for such publications as LIFE, Look, and Collier’s. Early in his career, as a young Magnum photographer, he recorded many of the 20th century’s most meaningful events. He captured people such as Marilyn Monroe, Nikita Khrushchev, Richard Nixon, and Che Guevara. Robert Capa would later induct Erwitt into Magnum Photos, and Erwitt would serve as president of the organization for three terms starting in 1968.

Being highly alert to the visible surprises in life, Erwitt possessed a deep appreciation of the moment and is skillful at capturing it. Fellow Magnum photographer Henri Cartier-Bresson believed:

“Elliott has to my mind achieved a miracle-working on a chain-gang of commercial campaigns and still offering a bouquet of stolen photos with flavor, a smile from his deeper self.”

Erwitt’s informal and ironic photographic style became his unique aesthetic. Elliott Erwitt became renowned as an uncanny observer of humanity and the human condition. His photographs captured the joyful bliss of the unexpected turns and quirky outcomes in life. Thus with humor and wit, his photographs elevated the sense of art in photography. Erwitt’s body of work helped position photography not only as a documentary enterprise but as one that could also capture the at times uplifting nuance of life. 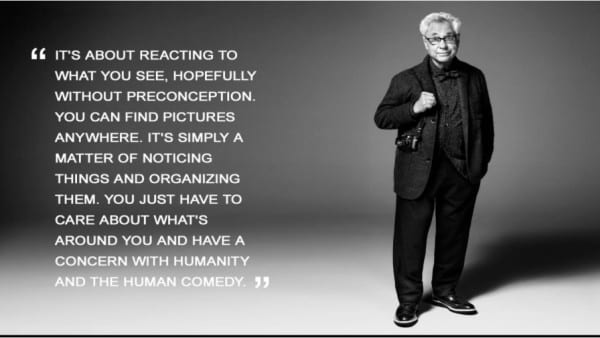