Moving effortlessly from magazine cover shoots to on the ground war reportage, and with a relentless and remarkable work ethic, Benson’s photographs feel as though he has captured everyone and everything. 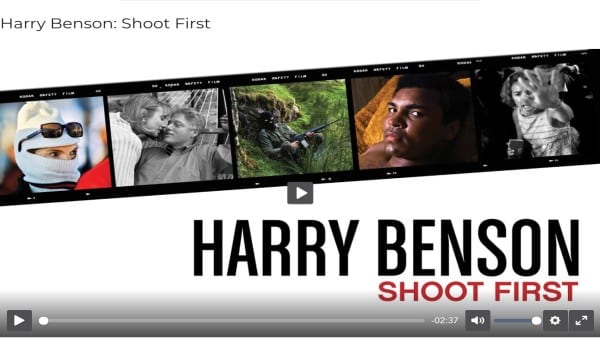 Chronicling the illustrious career of renowned photographer Harry Benson, the biographical movie Shoot First details Harry’s life and work and provides insight into the man responsible for some of history’s most iconic photographs.

Share this email with friends to watch Harry Benson – Shoot First, a film by Justin Bare and Matthew Miele. (Viewable at home from Netflix and Amazon prime and a variety of other sources by following this link http://www.magpictures.com/harrybenson/watch-at-home)

With Harry’s humorous and captivating storytelling as narrative, the film offers anecdotal tales while following Harry throughout his career. The first to record The Beatles landing in America and their meteoric rise to popularity followed by decades of incredible shots capturing everything from Winston Churchill, HRH Queen Elizabeth II, Dr. Martin Luther King, every U.S. president since Dwight D. Eisenhower, Andy Warhol and Bianca Jagger to the assassination of Robert F. Kennedy and the emergence of Muhammad Ali.

“I’ve always said: a great photograph can never happen again. I have always tried to be first on a story or the last one out because the story keeps changing. You try to photograph everything that you see; fleeting moments, final moments. Joy, regret; each a glimpse and gone forever.”

The documentary’s breadth of personal references from Hollywood actor Alec Baldwin, journalist Dan Rather, and designer Ralph Lauren (to name a few) attest to Harry Benson’s versatility. Moving effortlessly from magazine cover shoots to on the ground war reportage, and with a relentless and remarkable work ethic, Benson’s photographs feel as though he has captured everyone and everything.

“If I don’t take a photograph, I’ve made a terrible mistake. I photograph what I see, and what I see should inform.”

In 2009, Benson was named Commander of the Order of the British Empire by HRH Queen Elizabeth for his service to photography. He was twice named NPPA Magazine Photographer of the Year and was twice awarded the Leica Medal of Excellence. Benson’s photographs are in the permanent collection of the Smithsonian National Portrait Gallery in Washington, D.C.; Kelvingrove Museum in Glasgow, and the National Portrait Gallery in Edinburgh. His 60-year career as a photojournalist included magazines like LIFE, Time, Newsweek, Vanity Fair, G.Q., Esquire, Vogue, and Architectural Digest. He has enjoyed over 40 solo exhibitions and published 17 books.