In his legendary images captured over the span of two decades, David Yarrow’s immersive portrayal of wildlife sheds light on the magnificence of the earth’s natural beauty, as well as providing ways to help in preserving them. 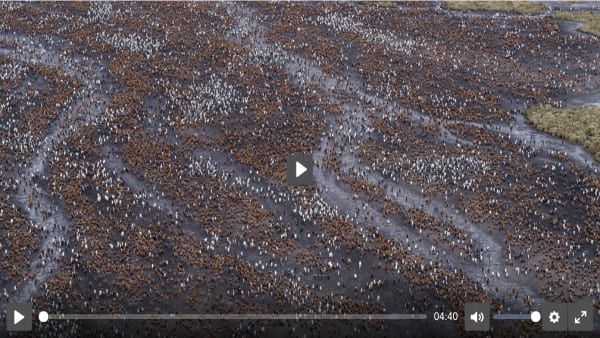 “Sometimes, the hardest places to photograph well are the most spectacular places.”

Yarrow has traveled from Amboseli to Iceland and beyond. In this video viewers are invited to journey through the scenic expanse of the South Georgia landscape with internationally acclaimed fine art photographer David Yarrow. Yarrow’s narration guides us through the creative process of shooting at one of the most challenging sites on the planet; his trademark relentless pursuit for the perfect shot takes us to St. Andrew’s Bay in the South Georgia islands. In this remarkable landscape, the photographer gains extremely rare access to South Georgia’s beaches and gets the viewer closer to what Discovery Channel refers to as the Antarctic “City” of King Penguins.

“I had a clear preconception of what was necessary to take a powerful image in South Georgia. My overriding goal was to capture a sense of depth and a sense of scale. South Georgia is raw and dramatic with many fiercely steep mountains towering above the wildlife, and to exclude them from an image would risk telling only half the story.”

As one of the most sought-after photographers in the world, we get a taste of the behind the scenes action required to get the “perfect” single shot. Author of three photography books detailing the expansiveness of his work, Nowhere (2007), Encounter (2013), and David Yarrow Photography: Americas Africa Antarctica Arctic Asia Europe (2019), British photographer David Yarrow kneels into the icy waters of the South Atlantic ocean and provides detailed insight into the conceptual and aesthetic rigor of his working process.

“All that matters is whether the final print stacks up. Whether it’s strong enough to elicit an emotional reaction.”

During an interview we conducted with Yarrow we asked him what he hopes people appreciate when they view his images. He answered:

“It’s a great honor and a privilege to have other people looking at my images. If they can learn about the wonders of the world and to give some balance about what’s hardship and what isn’t, that’s great to me. I have lofty ambitions to take pictures that engage people that weren’t there before and that’s quite a tough feat these days. If I can gain their attention and retain their attention, that’s the height of my objectives.

I like to be able to take pictures where people are amazed for whatever reason and haven’t seen something like it before. If they believe that it’s just beautiful or to be amazed how the image was achieved is also gratifying.”