A Unique and Forward-Thinking Photographer

The evolution of his art practice from landscape work into ‘camera-less’ photography captures the essence of photography. As a result, Fabian Miller ultimately expands the creative possibilities of the medium.

Known for working meticulously within the confines of his darkroom, Fabian Miller creates immersive, transcendent compositions, appearing to glow and palpitate in place. Fabian Miller creates works of art that free the imagination by their sheer magnitude and rich chromatic values. By physically directing light through a variety of translucent materials, Fabian Miller’s crafted exposures attempt to capture the aura of color and light itself.

In this short film entitled: Camera-less photography: Garry Fabian Miller, created for the Victoria and Albert Museum’s “Shadow Catchers: Camera-less Photography” exhibition, the photographer describes some of the sources of inspiration behind his work, from the observation of nature to his method of experiencing the landscape.

In this revealing and insightful short film, we hear Fabian Miller speaks about his conscious experience of the environment and how his photographic practice is a poetic response to the rhythms and patterns of the nature that surrounds him. 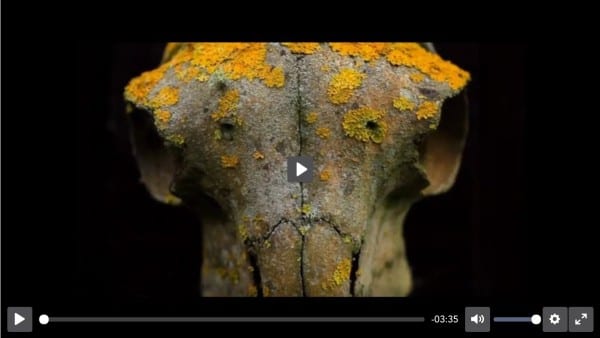 The Garry Fabian Miller video, created by the Edinburgh Film Company, illustrates the collaboration between the artist and the Dovecot Tapestry Studios. In the video, we see Garry Fabian Miller working in his Dartmoor studio, demonstrating how his luminescent exposures are created. The video shows the walls of the studio and the darkroom space, becoming an extension of the artist’s mind. The video displays the artist’s mark-making, light tracing, and taping on the walls. These actions are all indicative of the handcrafted methods Fabian Miller uses to create his pictures.

“Really, what my work is about is to try and create a thinking space. But also a kind of space one can slide into and disappear into and perhaps not come back from. I want the thing which appears to kind of come with a grace and a simplicity as if it’s always been there. For me, that should be an aspiration as if it’s just emerged into the world.” 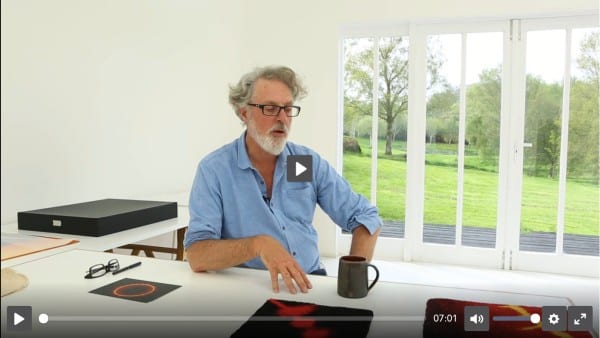 A Look into GFM’s Background

Garry Fabian Miller was born in Bristol, England, in 1957. His parents ran a portrait studio, so his interest in photography developed at an early age. Beginning in his teenage years, Fabian Miller used photography as a tool for documentary projects. As he began to take an interest in the light and color of the rural landscape, the artist gave up conventional photography with a camera over 30 years ago to explore his interests in space, form, color, and light, investigating the possibilities of time and space through the organic process of ‘camera-less’ photography. Working from a remote South West corner of England, Garry Fabian Miller started producing photographs by passing light through diaphanous objects and liquids onto light-sensitive paper. Thus, the artist effectively paints with light, more akin to the interest of lyrical painters than conventional photographers. He builds composite images through multiple, calculated exposures that range from thirty seconds to twenty hours.

The Ilfochrome and Cibachrome photographic paper contains dyes that react to the exposures, pushing the limitations of his materials to reveal qualities of light and color that reflect Fabian Miller’s thoughtful interpretations inspired by the region’s environmental properties.

Garry Fabian Miller shares love and fascination with the beautiful chromatic qualities of visible light. Additionally, these qualities connect him to groundbreaking artists such as James Turrell, Dan Flavin, and Mark Rothko, among others. His trajectory as a photographer, from photograms of plants to crafted light exposures, is a beautiful, comprehensive path towards abstraction. Fabian Miller’s evolution as an artist resembles a clarity akin to Mondrian’s abstraction of painting. It recalls the almost spiritual, resonating sublimity of Malevich.

After all, Garry Fabian Miller can capture, with his unique art form, the vital, universal, and intrinsic energies that live through him and his environment.

Simple Pleasures: Pictures to Inspire the Artist in You