“What we’ve loved in Africa is that body painting is really like a celebration. People have an amazing amount of excitement and energy around body painting. For them, it’s life-affirming, it’s spontaneous, it’s transforming, and it’s also the signature of being alive.” 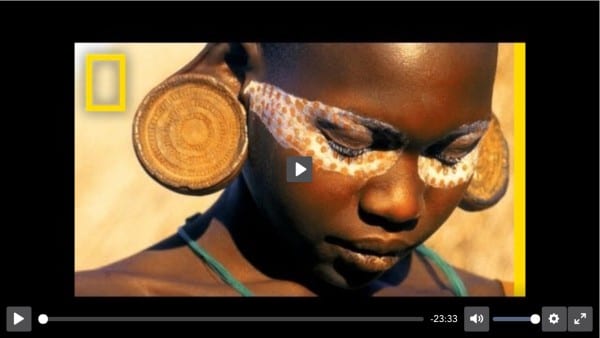 In this presentation for National Geographic entitled Painted Bodies of Africa, photographers Carol Beckwith and Angela Fisher recall their many stories of anthropological travel. The photographer’s document some of the oldest visual traditions and ceremonies in the African continent. Both Beckwith and Fisher, who have worked hand in hand for decades, talk extensively about their passion for photography, for the preservation of culture, and unexpected and uplifting human moments while on the road.

For the photographers, the pursuit of documenting the ancient visual traditions of Africa is of fundamental value. Africa is the historical and geographical epicenter of humankind, providing the underlying common thread in the essence of our human development. With the Nat Geo presentation, Beckwith and Fisher pay particular attention on body painting practices, one of the oldest art forms in Africa that date back to as far as 100 thousand years. The photographers recall their stories of gathering a mule train to reach the Surma during courtship season, meeting the Himba people in the oldest desert in the world, and traveling 700 miles to meet the Woddabe nomads of the Sahel, decorating themselves for the all-male beauty and charm courtship contests.

The Quest to Document Disappearing Cultures

Carol Beckwith & Angela Fisher each have over 40 years of field experience photographing Africa, creating pictures that are part ethnographic studies and part compelling works of art. In their quest to document tribal rituals and ceremonies in Africa, before their disappearance due to clashes with contemporary culture, the photographers managed to gain unparalleled access to some of the continent’s most remote areas. At times they had to wait as much as 12 years for permission to record seldom occurring ceremonies in previously unreachable tribal lands. Beckwith and Fisher gained access to secluded cultures through a mutual sense of intimacy, openness, and a profound wish to preserve the ceremonial heritage of the world’s oldest civilizations. They have consistently been both ethnographers and artists.

As children head for the cities, the rapid pace of change on the continent has given their work notable urgency. Even as the pair continues to find new cultures to document, they estimate that about 40 percent of the rites and ceremonies they have documented have already disappeared into the mists of history. Beckwith, from Boston, and Fisher, from Adelaide, Australia, have published books individually but the majority of their work has been coauthored. They have traveled more than 270,000 miles together, enduring every conceivable hardship in pursuit of their images. For instance, permission to visit the Kuba kingdom came after 12 years of trying. When they eventually arrived, the duo met children who had never seen a white face before.

“African Ceremonies,” and “African Twilight” their 2 defining body of work, are double volumed , pan-African study of rituals and rites of passage from birth to death, covering 93 ceremonies from 26 countries. “African Ceremonies” won the United Nations Award for Excellence for “vision and understanding of the role of cultural traditions in the pursuit of world peace.”

Beckwith and Fisher’s work has been exhibited in museums around the world. They have had comprehensive exhibitions at such institutions as the Boston Museum of Fine Arts, the National Geographic Museum, the Smithsonian Museum of African Art, and the Brooklyn Museum of Art. They have made four films that also express their interest in and love for Africa. Beckwith and Fisher received the Award of Excellence from the United Nations Society of Writers and Artists “for vision and understanding of the role of cultural traditions in the pursuit of world peace,” and were especially honored by Kofi Annan in 1999. WINGS have also awarded them the distinguished Lifetime Award. Beckwith and Fisher are passionate about completing the record of Africa’s quickly disappearing cultural rituals. The photographic duo wants to leave a legacy for future generations and make sure these cultural ceremonies as well as their underlying values are preserved into the 21st-century.

In a globalized world that seems less keen on respecting tradition in exchange for technology and modernity, the dedication to preserving humanity’s cultural arenas is an honorable, necessary, and arduous task. This enlightening National Geographic presentation helps to gain a deeper understanding of the value of photography as a record for preserving history. Beckwith and Fisher’s photographs underline the potential for the human body to become a vessel for the cultural and historical preservation of human narratives.

In an interview we conducted with Beckwith and Fisher, we asked what they hope people appreciate when they look at their pictures? They answered:

“We want people to appreciate the tremendous creativity of Africa. We try to tell the story behind the news headlines celebrating the dignity of people, the beauty of their art forms, and the meaningful way Africans move through life from birth to death marking each stage with rituals and rites of passage. We are deeply moved by the enormous diversity of the continent with its 1300 different cultural/ethnic groups spanning 54 countries – a statistic which often surprises our readers and audiences. We want people to journey through our books celebrating the many ways people live their lives – appreciating our differences and at the same time recognizing and honouring our commonality.”

Simple Pleasures: Pictures to Inspire the Artist in You