Tasini – In 2009 you were made a CBE, a Commander of the Order of the British Empire by Queen Elizabeth, which is a tremendous honor. And in 2007 you received an honorary doctorate from Glasgow University, your hometown. You just returned from a trip to Scotland, where you received another prestigious award. Can you tell me what it was for? And how was your trip?

Benson – In June 2013 I received an honorary degree of Doctor of Letters from the University of St. Andrews. I didn’t start my career expecting any awards, but I am very honored to receive them after 60 years of doing what I love to do – taking photographs. If there had been a bet made by my classmates at Eastwood Secondary School in Glasgow about who would be the last person to receive a doctorate, I would have won, hands down.

Benson – It could have been my father. It could also have been growing up during the war with the excitement of the time, wanting to be part of something. Listening to Sir Winston Churchill’s speeches on the radio made me want to get to the center of what was happening in the world. And I would see photographs in the newspaper that would encourage me to be part of it.

Photography is the easiest thing to keep you motivated. The camera will basically do whatever you want it to do. There is a simplicity and excitement; it doesn’t have to be complicated. You can judge what’s a good picture, what’s a bad picture – don’t take anybody else’s opinion – it’s what you like.

Tasini – From where do you think your natural ability for photography comes?

Benson – I never had any training, but I’m not saying that’s a bad thing. I think I learned a lot while working on London’s Fleet Street. There were at least 10 daily newspapers and each was trying to scoop the others for the morning edition. That sense of competitiveness has not left me.

Tasini – Your work with the Beatles is thought to have launched your international career. Would you agree with this statement?

Benson – I wouldn’t agree. I was only with the Beatles for three weeks and then off and on for two years. Afterward I went straight to hard news stories: race riots, MLK, Vietnam, the IRA, people from all walks of life. But with that said, I am glad I photographed the Beatles because I photographed arguably the greatest musical composers of the last century.

Tasini – How were you able to get so involved and so in depth with many of the most famous people in the world?

Tasini – With such a substantial portfolio, are you able to pick out pictures that are your favorites or have any that are most meaningful to you?

Benson – Well you’ve got your favorites. Mine would probably be the Bobby Kennedy assassination and the Beatles Pillow Fight. I would also add Truman Capote’s Black and White Ball, chess champion Bobby Fischer, and the photographs I have taken of Andy Warhol.

Tasini – What is your favorite subject to photograph?

Tasini – Photographing certain tragic events, for instance the assassination of Robert Kennedy in 1968, how do you manage to remain focused on getting the picture in the midst of so much chaos and trauma? Does it require a certain amount of emotional detachment?

Benson – I kept thinking ‘this is for history, don’t mess up today, mess up tomorrow.’ I’ve always been able to cut myself off. My business is to get photographs and do my job well. My job is not to get emotional about it. I knew Bobby Kennedy, I liked him very much, but my job was to document what was happening for history, and I know he would understand that.

Tasini – On a lighter note, your work in digital color interests me very much. Is there something color photography could offer you that black and white couldn’t? And vice versa?

Benson – Now I only work in digital color which can be converted to black and white, but I’m glad my earlier career was done on film, mostly in black and white. When I speak to people in galleries and on the street they invariably say they prefer black and white. Black and white has always been the medium of the photographer and color has been for painters. That said, I have always worked in color when magazines asked for it for covers, for celebrities, etc.

Tasini – With the advent of the Internet, social media, and the almost instantaneous capture and dissemination of visual images in modern times, how has the job of the photojournalist changed?

Benson – Anyone with a cell phone can be a photographer now. It’s amazing, but it hasn’t made photography any better. By getting quicker, it’s gotten worse. A hundred photographs a minute, or whatever, does not make necessarily good photography. To me, the digital color war pictures of today are not as compelling as war photographs taken on film, which is interesting because you can go back and look at pictures of Vietnam and WWII, everything before digital, and to me they’re just better. That is only my opinion, and others will certainly disagree.

Benson – I just hope they like them, that’s all. 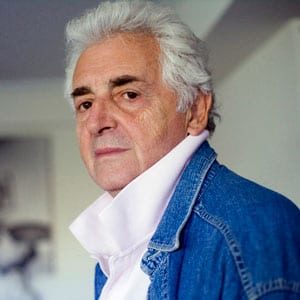 Harry Benson was born in Glasgow amid the drama of WWII with bombs dropping overhead, but Benson managed to escape through the lens of a camera.

His curious fortune struck when he was given a particular assignment in 1964: to capture The Beatles in France and on their first journey to the United States. This experience not only made for some of the most famous Beatles photography, but also sent Benson’s life in a completely new direction.

During the civil war in the Dominican Republic, both sides captured Benson in one day. He caught the horror on Ethel Kennedy’s face in the Ambassador Hotel after her husband Senator Robert Kennedy had been shot. Harry has photographed an amazing range of subjects including eleven US presidents and their families from Eisenhower to Obama. Portraits of major forces of the last half of the 20th century include Sir Winston Churchill, HRH Queen Elizabeth II, The King of Spain, Princess Diana, Princess Grace and Princess Caroline of Monaco, Andy Warhol, Mohammed Ali, Dr. Martin Luther King and entertainers The Rolling Stones, The Who, Greta Garbo, Frank Sinatra, Elizabeth Taylor, Jack Nicholson, Amy Winehouse and Brad Pitt. Benson covered wars in the Gulf, Bosnia, Afghanistan, and the list goes on.

In 2009, Benson was named Commander of the Order of the British Empire, (CBE) by HRH Queen Elizabeth for his service to photography. He was twice named NPPA Magazine Photographer of the Year and was twice awarded the Leica Medal of Excellence. In 2013 Harry received an honorary Doctor of Letters from the University of St. Andrews, Scotland, and in 2009 an honorary Doctor of Letters from Glasgow University and the Glasgow School of Art followed by an Honorary Fellow of the Royal Photographic Society in London. Benson’s photographs are in the permanent collection of the Smithsonian National Portrait Gallery in Washington, D.C.; Kelvingrove Museum in Glasgow and the National Portrait Gallery in Edinburgh. His 60-year career as a photojournalist included a contract with LIFE Magazine and photographs on the covers and inside major magazines worldwide, including: Life, Time, Newsweek, Town & Country, Vanity Fair, G.Q., Esquire, W, The London Sunday Times, People, Vogue, and Architectural Digest. He has enjoyed 40 solo exhibitions and published 17 books including most recently, “The Beatles On the Road: 1964-1966” published by Taschen in 2013.