Signed, dated and numbered from edition of 20 in ink on verso.

Harry Benson’s self-described “one photograph” is Beatles’ Pillow Fight from 1964 at the Hotel George V in Paris. In this instance, Benson was not only privileged to be working with The Beatles, but lucky enough to be with the legendary band when they received the news that their song “I Want to Hold Your Hand” went to number one on the charts in the United States. Before he knew it, Benson was artfully photographing a pillow fight. He was snapping away at their celebratory play fighting, catching the signature shot of Paul McCartney swinging a pillow at John Lennon while Ringo Starr jumps on top of George Harrison.

This is a strong belief from a photographer known for producing such a highly regarded and beautifully composed body of work shooting intimate photos of the most recognized personalities of the 20th century. During this particular time in 1964, The Beatles were still fresh, new, and working well together creating the perfect chance for Benson to capture them at their height. Benson’s timing was impeccably placed to capture Paul McCartney’s swing after Benson’s subtle suggestion led the way for an intimate and playful portrayal of the legendary band. Benson recalls processing the negatives in the bathroom of the George V and putting the negatives in his suitcase, never realizing their historic and cultural importance. 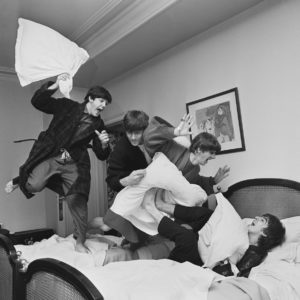