“I still remember the wonderful twinning of uncanny and wonder I felt when I first encountered Karen Knorr’s work. I’d been asked to write short fables to accompany some of the images from her “India Song” series, and I kept thinking, How did she make this? But also, Look what she has made! Karen puts together two categories I adore: buildings and creatures. And she does so with such elegance and play. She challenges and changes our way of seeing, nudges us to look at the beauty of human-made spaces, whether they be palaces or temples, and interrupts this with the beauty of the natural world. By juxtaposing animals and birds (many of them endangered) into these interior spaces, she captures something of the fragility of coexistence, but also offers much-needed hope of harmony.

It was a dream to have “Avatars of Devi” for the UK cover of my new collection of poems, “A God at the Door,” because it captured exactly what I believe the divine to be. A liminal threshold in the form of a doorway, along with symbols of the sacred and the profane. A magnificent lone Sarus crane, which mates for life, and a cheeky monkey looking straight at us. All pilgrimages lead us back to ourselves, and Karen Knorr’s work does just this.“ 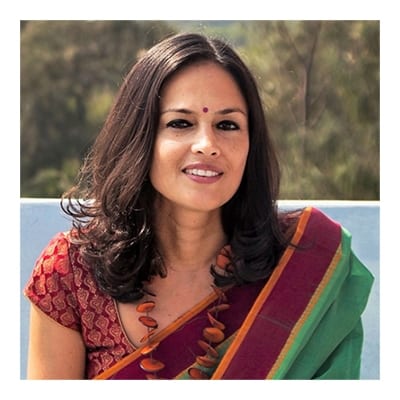 Tishani Doshi is an award-winning poet and dancer of Welsh-Gujarati descent. She was born in Madras, India, in 1975. She received her masters in writing from the Johns Hopkins University in America and worked in London in advertising before returning to India in 2001 to work with the choreographer Chandralekha, with whom she performed on many international stages. An avid traveller, she has been trekking in the Ethiopian Bale Mountains, visited Antarctica with a group of high-school students, and documented the largest transgender gathering in Koovakam. She has written about her travels in newspapers such as the Guardian, International Herald Tribune, The Hindu and the Financial Times.

She won an Eric Gregory Award for her poetry in 2001. In 2006, she won the All-India Poetry Competition, and her debut collection, Countries of the Body (Aark Arts), won the Forward Prize for Best First Collection. Her first novel, The Pleasure Seekers (Bloomsbury, 2010), was longlisted for the Orange Prize and shortlisted for the Hindu Fiction Award, and has been translated into several languages. Her second poetry collection, Everything Begins Elsewhere, was published by Bloodaxe Books in 2012. Fountainville: new stories from the Mabinogion was published by Seren in 2013. Her third collection, Girls Are Coming Out of the Woods (Bloodaxe Books, 2018), is a Poetry Book Society Recommendation and was shortlisted for the Ted Hughes Award for New Work in Poetry 2018 in the UK, and for the poetry category of the 2019 Firecracker Awards in the US. Her second novel, Small Days and Nights (Bloomsbury, 2019), was shortlisted for the RSL Ondaatje Prize. Her fourth poetry collection, A God at the Door, is published by Bloodaxe in 2021.

Tishani Doshi lives on a beach between two fishing villages in Tamil Nadu with her husband and dogs. She is currently Visiting Associate Professor of Practice, Literature and Creative Writing at New York University, Abu Dhabi.

Learn more about "A God at the Door" 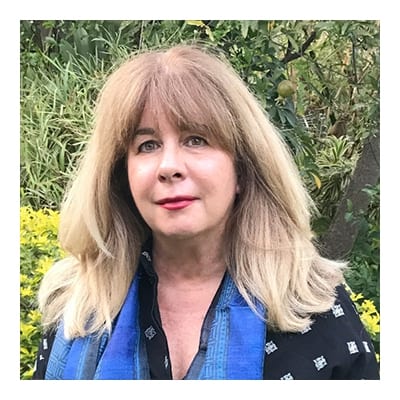 Karen Knorr is both a conceptual photographer and a practitioner of Magical Realism. In her work, Knorr visualizes the symbolism of popular parables and mythologies from history, ultimately investigating photography’s power to create meaning. In her latest series, Knorr works with a large-format camera and photographs architectural interiors and animals separately. She later joins them through editing software to create an illusion that references ancient fables from history.

In Knorr’s mythological, visual realm, animals contain a mystery and an allegorical component that become anthropomorphic. While she presents historical buildings and locations populated with elements from the animal world, she is interested in juxtaposing both aspects in her finished pictures. Aware of the history of aristocratic interiors and institutions, Knorr selects culturally significant locations of architectural grandeur. Her photographs call into question our assumptions of reality, how we live in and use domestic spaces, and how we relate to the greater world of nature. Her photographs create visually complex, vibrant, and seductive open-ended narratives.

Karen Knorr was born in Frankfurt, Germany, coming from European and American heritage. She was raised in San Juan, Puerto Rico, in the 1960s and later finished her education in Paris and London. Karen has taught, exhibited, and lectured internationally, including at Tate Britain, Tate Modern, The University of Westminster, Goldsmiths, Harvard University, and The Art Institute of Chicago. She studied at the University of Westminster in the mid-1970s, exhibiting photography that addressed cultural studies and film theory debates. She is currently Professor of Photography at the University for the Creative Arts in Farnham, Surrey.

Since her life changing journey to India in 2008, Knorr’s work explores Rajput and Mughal cultural heritage and its relation to feminine subjectivity. India Song, explores the past and India’s contemporary heritage sites across Rajasthan. Future projects are now developing in Italy, India, Japan and USA.

In the Studio with Albert Watson

Simple Pleasures: The British are Coming! The Photographic Legacy of the 60's Music Scene