Signed, titled and numbered from edition of 12 on lower right recto.

“The Living Room” is a newly printed image in an edition of 12, exclusively made for Holden Luntz Gallery collectors.

In, The Living Room, American artist Sandy Skoglund investigates and redefines a home’s primary gathering space, the living room. She creates a fictional environment that elevates the viewer’s capacity for interpretation and exploration. Skoglund ultimately reimagines an alternative reality and subverts how one typically reads a photograph.

The repeated sculptures of dogs emerge strikingly through the image. Meanwhile, the furniture items resemble intricate topiaries that can act as small monuments to the middle-class home. A couple, a man and a woman, who appear more like a catalog advertisement, lounge by an unlit fireplace. These topics of American’s obsession with perfectly manicured lawns and the overwhelming love of dogs are examined with green turf acting as a bed for the dreamlike assortment of dogs. Even 20 years after the piece was created, these issues are still relevant, highlighting Skoglund’s adroitness at parodying cultural conventions.” 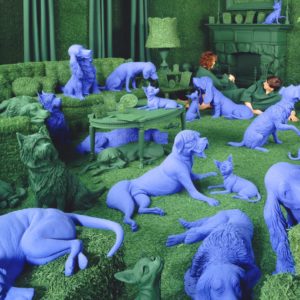