Signed, titled, dated, numbered from edition of 30 copyright notation in ink and signature blindstamp on the recto.

Raining Popcorn (2001) is a piece commissioned by the Faulconer Gallery of the Grinnell College in Iowa. The commission would take Sandy Skoglund many months to complete and ultimately expands on her already rich visual language developed over time with works like Revenge of the Goldfish, (1981) and Fox Games, (1989). In Skoglund’s art practice, the conceptual subject matter works in conjunction with the physical materials she uses, drawing on historical references, and instilling them with psychologically complex meaning.

Produced in 2001, just before the September 11 attacks, Raining Popcorn references the complex roots of American contemporary culture and overconsumption. The unifying subject throughout the piece is popcorn, so pronounced and repetitive it replaces nature. The popcorn becomes an all-encompassing reality, lining the walls, the floors, the subjects, and alas growing from trees. This obsessive environment constructed by Skoglund derives from the artist’s desire to combine sculptures of animals, live humans, and nature into a space that involves thought and play, as part research and part recreation.

The abundance of Popcorn acts as a reflection of the cultural environment, being noisy, excessive, universal, and part of popular culture. Currently, Americans eat 13 billion quarts of Popcorn a year, produced mostly in the heartland of America, from Illinois to Ohio. The piece is a response to memories and experiences Skoglund felt as a graduate student in Iowa.

“Now, when I get an idea, it may actually be 20 or 30 years old. The idea of using Popcorn in my work occurred that long ago. In graduate school, I stuffed a sewn starfish shape with pink-painted Popcorn. When the Grinnell project came about, I had forgotten about this. I was interested in the notion of grain and the Midwest – Iowa, and corn. I attended the University of Iowa for grad school and will never forget the endless fields of corn and the wonderful sense of equanimity that came as a result of the horizon line being so far away and yet so visible. It left an indelible impression of calmness on me. So, on some level, I wanted to deal with that recollection.”

The painstakingly handcrafted quality of the endless popcorn creates a fantasy landscape, one that raises questions about climate issues and our surrounding environment, as well as fantasy and reality. In Raining Popcorn, Skoglund’s objects and composite staging have a base in truth; they are not a product of photoshop or digital manipulation. It is critical for the artist that the photographs evidence something genuine. The constructions are explicitly staged to be photographed from one unique viewpoint.

“I wanted to work with this Popcorn in an unexpected and interesting way. I wanted to surprise myself. At the same time, I kept thinking about the weather in Iowa and about the sky. I decided to focus on the feeling of falling, as opposed to flying insects: dragonflies and butterflies. This piece is more about the sky, weather, and precipitation, related to the endless horizon of the Midwest. Gradually the piece evolved from the floor onto the wall, as I became more interested in a vertical space created by the endless walls of Popcorn woven together.” 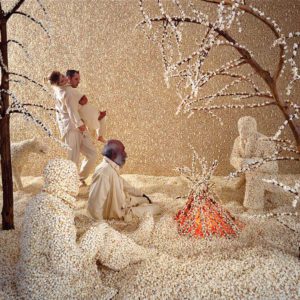