In Massimo Listri’s “Palazzo Altieri, Roma,” he offers an intimate look at an aristocratic interior seemingly throwing the doors wide open upon this magnificent 17th century Baroque space located in the heart of Rome.

Palazzo Altieri remains an emblematic example of the sumptuous and lavish interiors laden with gilding and richly decorated halls that characterized Roman Baroque architecture. It was built as a befitting residence for the last descendants of the Altieri family who were perhaps the most prominent noble family in Rome during the period with Emilio Altieri becoming Pope Clement X in 1670. His time as Pope coincided with further grand renovations suitable for the powerful family including the salon aptly captured by Listri.

The salon itself contains major works of furniture and paintings from the period, beautiful frescoes by leading Roman artists, and even an ancient Roman mosaic from Ostia depicting Mars and Rhea Silvia located on the floor. Palazzo Altieri was a symbol of power and prestige at the time, and today Listri deftly captures the atmosphere of the impressively opulent space though his intuitive sense of perspective and composition revealing a tranquil and beautiful world for all to see. 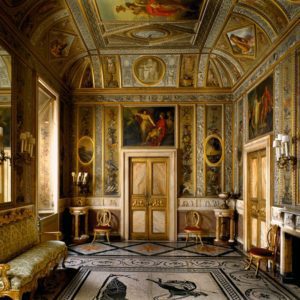