The Laurentian Library, which took shape from 1524 in the monastery complex of San Lorenzo, would become a milestone in the history of libraries. It was distinguished not only by its valuable holdings and its groundbreaking architectural forms, but in particular by its patron

Cardinal Giulio de’ Medici (1478-1534) and the architect he commissioned to design it, Michelangelo Buonarroti (1475-1564). Built to house the famous private library of the Medicis, but planned from the outset as a public institution in the form of a monastic library, the Laurenziana held a special position among the libraries of its day. It was opened by Grand Duke Cosimo I de’ Medici in 1571, and by 1589 it contained 3,000 precious manu­scripts, of which 63 had once belonged to Cosimo the Elder (1389-1464). Cosimo’s grandson, the humanist, poet and writer Lorenzo ii Magnifico (1449-1492), took a particular interest in the Medici collection of books. With the aid of a circle of learned friends, most famously perhaps the philo­sopher Giovanni Pico della Mirandola (1463-1494), he expanded it into an impressive universal library in the spirit of humanism. He also added to the artistic value of the collection by commissioning sumptuous manuscripts with magnificent illuminations. The Medicis’ political fortunes as rulers of Florence did not run smoothly, however, and they were subsequently ousted from power. Their carefully created library faced the threat of confiscation and was taken for safekeeping to the Rome residence (today the Palazzo Madama) of Lorenzo’s son, Cardinal Giovanni de’ Medici, later Pope Leo X (1475-1521). This was the situation when Giovanni’s cousin Giulio de’ Medici, shortly a􀏓er his own election as Pope Clement VII (1478-1534), decided to move the family library back to Florence to the monastery complex next to the Medici family church of San Lorenzo. He thereby took up a building programme initiated by his cousin Leo X, and embarked on the remodelling of the Medici family chapel and its adjoining rooms. In 1524 Michelangelo began work on the nearby library. The elongated reading room takes up the tradition of medieval libraries with its two rows of wooden desks (plutei), also designed by Michelangelo, to which the manuscripts were fastened by chains. From the middle of the 16th century up until the start of the 20th century the books could thus only be consulted at their desks and when not in use were stored inside. Architecturally, however, Michelangelo created something profoundly new in this room lit from both sides and articulated with contrasting elements in dark pietra serena: a space that is no longer subdivided by pillars. The floor of the central aisle, patterned in red and white terracotta, reflects the decorative forms of the magnificent coffered lime-wood ceiling overhead. Michelangelo’s final contribution to the Laurentian Library, on which he worked largely from Rome, was the shaft­-like vestibule, lit solely from above, which he designed around 1558. – Massimo Listri’s The Worlds Most Beautiful Libraries, Taschen 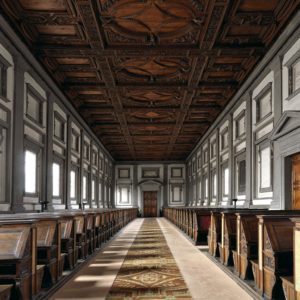