“During our travels in America, we have learnt a great deal about cowboys. The difference between someone who can ride competently and a true working cowboy may ostensibly appear marginal, but in extreme conditions a chasm appears.

To work a horse in -20 degrees, in two feet of fresh snow, whilst holding a weapon in one hand, appearing totally at ease, is a bridge too far for 99% of riders. So, on this set in Norwood, Colorado we knew we had to work with the best of the best. Ty Mitchell on the left is as authentic a Texan cowboy as they come and it is no surprise to us that he will soon be on set for three months with Martin Scorsese. I don’t think Scorsese will be disappointed with any aspect of Ty’s character. It will not be Ty’s first rodeo, Anthony Bourdain featured him when Parts Unknown visited West Texas and Marfa.

To his right, Michael Malone is a local rancher from Colorado and he immediately impressed us with his understated confidence and ability to play to a role. I fancy he could ride a horse sidesaddle whilst totally stoned and I sense such a challenge may have been put to the test once or twice. We welcomed him to the team with open arms.

In my mind, the key variable in this photograph is the light. On a sunny winter’s day, with snow on the ground, I believe the best light is actually in the first three or four minutes when the sun raises its head and touches the subject. 10 minutes after sunrise is too late as the sun is too harsh on the subject. In those initial minutes, the sun can be behind the camera and give the cameraman huge flexibility. In this case, the flexibility I needed was a very fast shutter speed.” – David Yarrow 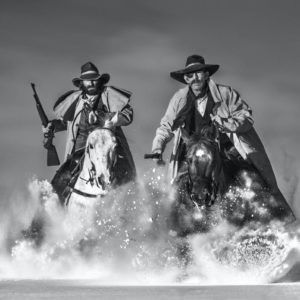