Keeping Up with the Crouches, Amboseli, Kenya

This bizarre composite taken over a period of 5 seconds by a watering hole, on the North East side of Amboseli dry lake, was taken with a 28mm lens placed on a remote-controlled camera. There is no doubt that it was a low percentage idea because my focal point required a huge giraffe within no more than three meters of the camera, otherwise a 28mm is all too loose a lens to use against a flat backdrop of an arid desert. I chose my focal point because I wanted a low chance of a big shot rather than a good chance of a boring shot. That has to be the way in 2019.

Giraffes are also very skittish and even setting up the camera is an issue if they are within 400 yards. They don’t like human presence and why indeed should they?

Over the years we have failed with giraffe, but in August 2019, one unbelievable piece of luck resulted in this image. When I looked into the camera’s screen from the then deserted watering hole, I could not believe it and I just hoped that the focus was pin sharp – not easy when the head of the giraffe is much further away from the camera than the hoofs.

The focus was fine, although I have no other photograph from the series. By the time the giraffe arrived, the sun was getting low – and the camera was pointing that way, so this was not an easy file to work with. I wanted detail in both the giraffe and the sky.

The end result is surreal and then the next problem was to find a name. Our team threw ideas around in the jeep in Kenya and when we came up with “Keeping up with the Crouches”, we knew we had it. Of course, it is a nod to a tall British footballer and overseas audiences will no doubt be confused, but Peter and Abbey Crouch are delighted with the name and they do indeed have four children.

The final piece of the jigsaw was the position and posture of the lion. Only Kevin could do this and he is a true genius.

This is one of the most important and challenging projects of my career – it is creative and I hope we can break a few fundraising records. It really went far better than any of us hoped. – David Yarrow 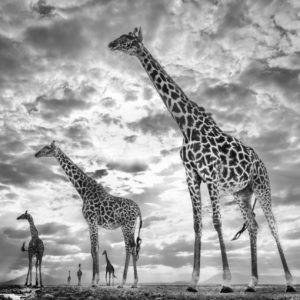