“I just can’t bring myself to drift from my default position of wanting wild west saloon images to be long of menace. I see no reason to introduce a mood of levity and laughter as these were bad ass days in loosely governed frontier towns marooned in the middle of nowhere. With alcohol and women came danger, perhaps it was always so. Of course, I am being postmodern and playful with the composed close ups; almost to the point of being cartoonish. But why dumb things down when we are simply telling stories.

On this set, high in the Crazy Mountains of Montana, we cast three of my favourite cowboys – Ty Mitchell and Ryan Marshall from West Texas and Mad Jack from Virginia City, Montana. Ty became an extra for Scorsese last year and I can see exactly why. The girls – Erica Lawrence from New York and Josie Canseco from LA – complemented them well.

But it is the big black wolf who steals the show and lifts the photograph. The light was negligible so there was no margin for error, but so long as I managed one sharp picture I knew the subdued lighting would add to the mood. This is a dangerous place where, during a storm induced lock in, anything could happen.

The weird thing is, everyone wants to go into that bar right now – what could possibly go wrong?” – David Yarrow 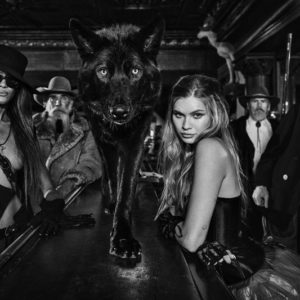