“More often than not, a sense of place is an integral ingredient of a strong contextual photograph. If we can manage that in South Sudan and South Georgia, it should be possible in my home country of Scotland. Whenever I work up here, I am slightly on edge as I feel a little bit more pressure to deliver.

This is probably the best photograph I have taken in Scotland (if we exclude the football images of Celtic and Rangers in the 1980s) because it scores highly on both subject and context. If one or other is mediocre there is no image, but in this case, the 14 pointer stag is magnificent and the rest is Scotland as Scots know it and as it is assumed to be by others. Grand, slightly mournful, but at all times unique.

I don’t have an issue magnifying nature. The romanticist movement glorified aesthetics and I am of that persuasion. Why dumb things down? Scotland can be bleak and gloomy, but therein lies its beauty.

I could not have achieved this frame, high up in the coastal hills of North West Scotland, without considerable local help and I would like to thank Colin Murdoch for his support and counsel. Our team call him “The deer whisperer” and I think that is about right. He is the most cheerful man I know at 5 am in the morning.

I think this a deeply emotional image and all the better for it.” – David Yarrow 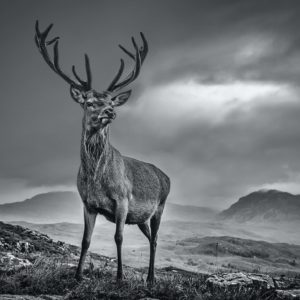