I had a clear preconception of what was necessary to take a powerful image in South Georgia. My overriding goal was to capture a sense of depth and a sense of scale. South Georgia is raw and dramatic with many fiercely steep mountains towering above the wildlife and to exclude them from an image would risk telling only half the story. These mountains define the island.

The riddle is that to include the Everest like peaks and also the wildlife on the beaches below risks the image being too loose – there must be detail in the foreground and this necessitates proximity. So I am wanting everything and that can be a challenge in low light. I dwelt over this dilemma for many hours on the way to South Georgia and I was reminded that simple maths often plays a lead role in making an image.

The lens best equipped for the challenge of giving depth as well as foreground detail is my favourite Nikkor 58mm F1.4 lens – it is the most important piece of camera equipment I own.

The first day on St Andrews Bay, we landed on the beach at 4.40 am, but this was too late to set up and then capture the soft early morning light. By 5.20 am, on a clear summer day the light is already too harsh and the King Penguins are lit up like Christmas trees. It is too much. So the following day, the whole team was on the beach by 3.50 am – quite an achievement and one we are all retrospectively proud of.

I had my moment in the corner of the beach at about 4.40 am. I knew that’s where the big groups of penguins marched for their morning fish and the light – whilst low – was just strong enough to give the penguins a little “ping” without being too visually loud or harsh.

I chose a D5 camera simply because I thought the more shots per second, the more the chance of the penguin pattern cooperating in the one shot – I know to my cost that armies of penguins can be messy.

It is not often that your day is complete before 4.45 am, but this was the day. It was a wrap. – David Yarrow 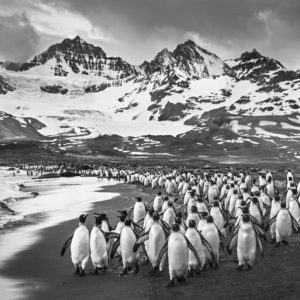