No Country for Old Men

The title for this photograph pays homage to the Coen brothers’ celebrated Oscar winning film of 2007. Their screenplay was played out against big sky American vistas – albeit in the south of the country, rather than in Montana where this image was taken.

Montana is the home of the “big sky”, acknowledged by a famous ski resort with that exact name. I wanted also to explicitly celebrate the majestic depth and height of the state’s visuals in this narrative. In London, we had searched exhaustively for the right road and the right backdrop in the state. The mountain range called The Crazies, when looking west from 10 miles north of Big Timber, ticked all the boxes. On a clear morning, it offered everything.

When we checked out the location the week before the shoot, I found the exact spot to work with and we soon identified the right lens to ensure the composition was bang on. As with previous shots the key dynamic was to find a straight road with a steady incline because that is the only way to truly convey depth. But all this prep work was without the VS superstar that is Josie Canseco and my “go to” mountain lion – Smokey.

Mountain lions that have grown up in sanctuaries – like Smokey – are still bouncy and their movements are very difficult to anticipate – especially with a Victoria’s Secret model at their side. It was a low percentage idea and the light was about to become suboptimal when I had my moment.

My shots with Smokey raise considerable amounts for conservation and increase awareness of the magnificence of the species. Smokey is in the very best of health and I think rather enjoys being a star.

Josie and Smokey are both in their prime – it really was no place for old men. – David Yarrow 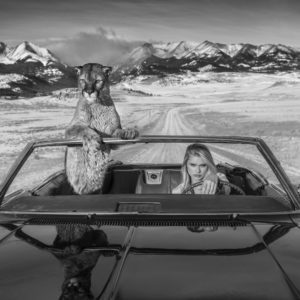