I think that this big image was well earned. Gary Player’s adage that ‘the harder I practice, the luckier I seem to get’ carries a great deal of resonance every time I look at this photograph. How appropriate it was therefore that I took this image just 32 hours after celebrating Gary’s 80th birthday in Sun City, South Africa. We have become good friends over the years and I am full of admiration for his passion and commitment to the pursuit of excellence. In my lower profile world, this image of an adult male lion is as good as I can do, but by practicing and getting in wrong, I found the way to finally get it right. It is a lucky shot, but maybe I earned it. For one thing, I have never returned from a shoot dirtier or smellier in my life.

The African lion population may have fallen by 90 % over the last 100 years but there are still enough of them around in Botswana and South Africa in particular, for their behaviour to be well documented by photographers. It is not like capturing imagery of a snow leopard – seek and you will find. However, an encounter with a lion where the human party is sitting 80 yards away in a jeep is hardly groundbreaking work. Telephoto images of this encounter tend to be sterile, generic and fairly dull. There is no sense of the animal’s soul because everything is too distant – no one takes a portrait of a beautiful woman from a jeep 80 yards away and why should that therefore work with a wild animal? Proximity and no magnification contribute character and power to any portrait.

As Ansel Adams taught us, ‘the lens looks both ways’ and he understood that a standard or marginally wide angle lens offered the best conduit for offering some degree of spiritual immersion. The 35m lens is indeed by far my favourite portrait lens, but very few photographers even consider using this in wildlife portraiture – it is totally counter intuitive – especially with predators such as big cats. It is good to break rules and approach one’s work at 180 degrees to what is considered the norm – what is the point of being part of the crowd?

My approach – as many know – leans on the use of desk research, analysis, field support from the very best and then the employment of remote controls. On location I will often stand in a cage and leave the camera some 50 yards from me, to do the work. It is the opposite of a zoo – the lion is in the wild and I am in the cage. Many that know me might joke that it is not before time that I am caged, but this is not normal photography. However, it is my way and over the years, I have refined it again and again. Nevertheless the success rate is very low – it is not a job for those that require a diet of immediate and relentless gratification. If it were that easy there would be a few other images like ‘Gold’ knocking around.

Kevin Richardson is an icon in South Africa – much like Gary Player, albeit not in sport but conservation – like indeed Gary’s late brother Ian. The rhinoceros was Ian Player’s field of practice, whilst Kevin is the Lion Whisperer. I have worked with Kev for sometime now and we have built up a great mutual respect and friendship. To watch him work with lions in the same way that George Adamson did in Karo, Kenya all those years ago is quite astonishing. His talent is unique and quite remarkable. Kev works with very few photographers and I hope that continues to be the case – his huge fan club across the world suggest that there are no awareness issues here. Lions are dangerous to all but him and I have always worked rigidly within what he regards as safe – he has a responsibility and so indeed do I.

We work together now on a number of conservation fronts, but the most immediate goal is to put pressure on the legality of the practice of canned hunting of lions in South Africa. This medieval and dark practice is protected by the wealth of some South Africans who will fight to protect their profitable trade with trophy hunters. But in time, it will be banned and I am sure Kevin will be instrumental in this progression. Our legacy of our time on this planet does not currently look that great, but this would constitute a small victory.

‘Gold’ was my last picture of 2015 and perhaps it is also the most impactful I have taken in the year. The focus around the lion’s eyes is pin sharp and that lends huge power to the image. Without that precision, it would not be the big picture that people assure me that it most certainly is. Certainly no picture that I have taken has ever had such an immediate impact on social media. – David Yarrow 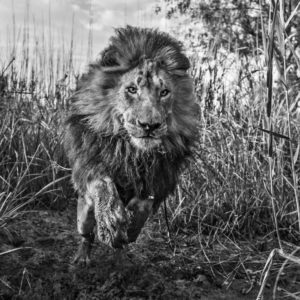